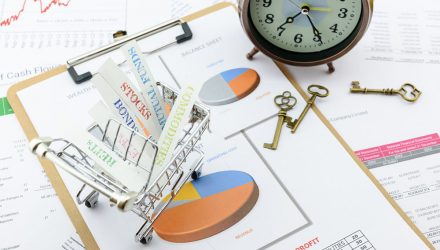 When analyzing the high yield ETF landscape, not shockingly it is dominated by two names – HYG and JNK. These have become the bellwether names for those looking to get broad high yield exposure. And while for some investors these are the ideal vehicles for the exposure and/or accessibility they desire, there are a plethora of other ETFs available that allow for a different exposure than a pure broad-based. While the aforementioned tickers make up nearly two-thirds of the assets under management (“AUM”) of this larger universe, there are rather significant assets in these ‘other’ names.

This bucket of ETFS is by far the largest in terms of AUM outside the broad-based names.  Based on my slicing and dicing, this bucket makes up a bit over 27% of the high yield AUM.  A majority of the assets are in three names which focus on the short part of the curve (5-years and in).  Some may argue based on the duration profile of the broad-based high yield universe that these short-term high yield names are not significantly different.  While there is some truth to that argument, there are differences in issue characteristics that can provide some differentiated exposure between short term and broad-based high yield (outside of the obvious duration exposure).

I have also included in this bucket the series of Guggenheim’s Bulletshares. While the series itself is not purely short-term, given there are a couple of names that extend out beyond 5 years, a bulk of their assets reside in the shorter part of the curve. One of the benefits to the Bulletshares is they allow for a quite specific curve exposure.  If an investor wanted only the shortest-term exposure, they could utilize only the 2018 ticker as example.

Another ETF is this group is HYGH, which hedges out any interest rate exposure, leaving the investor with more pure high yield spread with zero duration. While definitely not the same based on the security attributes, this type of exposure could be viewed as a compliment/replacement for bank loan exposure in that both are more pure spread/zero duration type.

Fallen Angel ETFs have been on many investors radars as of late due to some very strong performance. This classification of high yield is very interesting because it only includes issuers that were rated investment grade at issuance and then were subsequently downgraded to below investment grade. As such, the issuers still may have favorable fundamentals as compared to original issue high yield bonds. Additionally, as a group the Fallen Angels have a higher quality profile than broad high yield. A quick data pull had Fallen Angels at about 73% in BB-rated as compared to about 47% for the broad based names.

In the ilk of the Smart Beta revolution (particularly in equities but growing in fixed income), there are a handful of alternatively-weighted high yield bond ETFs in the market. The largest and oldest of these ETFs is PHB, which tracks a RAFI index. Because of the fundamental weighting, the corresponding portfolio will have a similar high-quality focus as Fallen Angels. But one difference is PHB explicitly states it will not invest in bonds rated lower than B, whereas Fallen Angels have that rating skew as a function of its issuer subset.