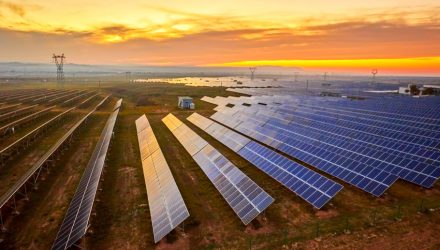 When, not if This ETF Becomes an Energy King

Renewable energy sources, led by solar and wind, are capturing increasingly larger shares of the energy market, a trend that should benefit ETFs, such as the ALPS Clean Energy ETF (ACES), over the long-term.

As some of the past decade’s alternative energy investments start paying off, ACES has the potential to do the same. Up almost 14% over the past month, ACES is already delivering for investors.

“More than $2.7 trillion has been invested in building up renewable energy capacity over the past decade. In those same 10 years, renewables more than doubled their share of the global power mix, from 5.9% in 2009 to 13.4% last year,” reports Nathaniel Bullard for Bloomberg.

One reason ACES matters for long-term investors is that much more spending on a global basis to meet various sustainability initiatives.

“More investment is needed to meet the goals of the Paris Agreement, and governments and industry groups are touting clean-energy investment as an essential part of recovery from the Covid-19 pandemic,” according to Bloomberg.

“For the first time in 2015, China, India, and other developing countries invested more in clean energy than the developed world did, and there’s been no going back. Developing economies have received more than half of all dollars invested in clean energy for five years in a row,” reports Bloomberg.