You are at:Home»ETF Building Blocks Channel»US Renewables Are Closing In on Coal 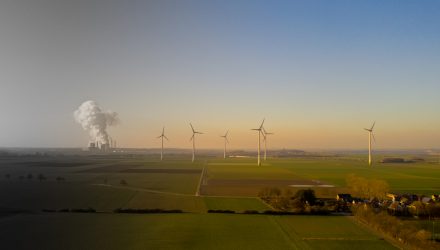 US Renewables Are Closing In on Coal

Like any other industry, energy has a new and old guard. Today, those factions are competing on pricing. The current state of that competition bodes well for assets like the ALPS Clean Energy ETF (ACES).

Over the evolution of the renewable energy industry, a primary point of scrutiny for producers and investors alike is when price parity with traditional fuel sources will be achieved. When it will be more economical to power the world with wind, solar, and the like over dirty fuels? That period is arriving in real time.

“About 80% of U.S. coal plants are now more expensive to keep running than to swap out for new wind and solar capacity, according to a report from Energy Innovation, a non-partisan climate and energy think tank,” reports Leslie Kaufman for Bloomberg.

Though dwindling, coal still accounts for a significant percentage of power generation in the U.S. However, as ACES components, namely those in the solar and wind arenas, continue tilting costs in their favor, coal’s slice of the domestic energy mix will continue to decline.

Data confirm coal is dying a slow death in the U.S.

“Coal has been steadily declining as a fixture of the U.S. energy mix for more than a decade due to combined pressure from activists and market forces. The Sierra Club, which runs the Beyond Coal campaign aimed at eliminating coal power in the U.S., says that 339 plants have either been retired or are on their way to retirement since 2010, leaving just 191 still operating indefinitely,” according to Bloomberg.

The $921.74 million ACES allocates more than 44% of its combined weight to wind and solar stocks, according to issuer data. Those are the fund’s second- and third-largest industry exposures, respectively, behind efficiency/LED/smart grid.

“Coal use has dropped so precipitously that it’s no longer the leading stationary source of air pollution, according to another new study out Wednesday. The report from researchers at Harvard University found that as of 2017, burning biomass and wood for energy led to more detrimental health effects than coal. That same year, burning gas caused more deaths than coal in at least 19 states,” concludes Bloomberg.