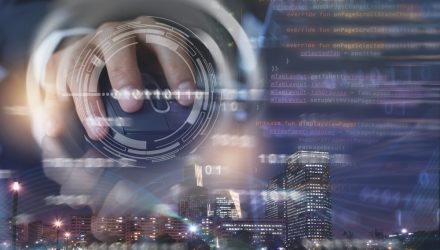 For most of this year, technology has been one of the brightest sectors, a scenario that’s providing ballast for ETFs such as the ALPS Disruptive Technologies ETF (CBOE: DTEC).

More recently, the sector is retreating, but rather than being a cause for alarm, the pullback could be an invitation for some investors to embrace growth opportunities available with DTEC. An important consideration when evaluating ETFs like DTEC are data points proving the tech sector is on much sturdier ground today than it was when it imploded 20 years ago.

“When we compare the most recent run-up in IT to its counterpart from 20 years ago, we observe that the current relative outperformance of the sector is much less extreme than during the late 1990s,” according to S&P Dow Jones Indices. “Moreover, the relative volatility of the IT sector was much higher then (December 1996-December 2000) than it is now, with an annualized standard deviation of daily relative returns of 23%—almost two and a half times the current period’s standard deviation of 9.5% (December 2016-August 2020).”

Reasons to Back DTEC

Some other DTEC highlights include industry level diversity, which many traditional rivals lack, and strong exposure to high-growth themes, including cloud computing and cybersecurity.

While DTEC clearly fits the bill as a growth idea, some of its components are quality names and that’s an admirable trait in this environment.

“Finally, we observe significant differences when we compare the current factor exposures of the IT sector to its exposures in December 1999,” notes S&P Dow Jones. “In 1999 and the present, IT had a strong tilt toward momentum and high beta and a tilt away from value. However, one of the main differences between now and then is that IT currently has much stronger tilts toward quality and low volatility than it did in 1999. This suggests that the companies within the current IT sector are both more profitable and less volatile now than they were 20 years ago.”