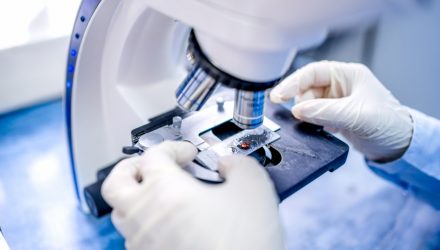 Biotechnology stocks and the related exchange traded funds are under pressure as growth stocks stumble this year, but interested investors have some potential positive facts to ponder.

First, biotech valuations are at depressed, rarely seen levels. Second, catalysts are starting to emerge, and they don’t all center around consolidation activity. Those factors could affect ETFs such as the ALPS Medical Breakthroughs ETF (SBIO).

Morgan Stanley recently reviewed the list of biotechnology stocks with negative enterprise values in its coverage universe. Following that evaluation, the bank boosted the number of biotech names with potential catalysts to 27 from 20 — a healthy increase.

That’s relevant to SBIO investors because some of the biotech stocks on the Morgan Stanley list are members of the ETF’s roster.

Galapagos is SBIO’s fourth-largest holding at a weight of 3.75%, as of May 30, while Kodiak Sciences accounts for 0.36% of the fund’s roster, according to issuer data.

Alector (NASDAQ:ALEC), which has a product in Phase III clinical trial for the treatment of frontotemporal dementia, Alzheimer’s, Parkinson’s, and amyotrophic lateral sclerosis diseases, is also on the Morgan Stanley list of biotech names with catalysts. That stock accounts for 0.76% of SBIO’s portfolio.

“Multiple names offer catalysts with potential to have a significant stock impact over the next twelve months,” noted Morgan Stanley analysts.

The bank has overweight ratings on 12 biotech names, including the aforementioned Alector and Galapagos.

Allakos Therapeutics (NASDAQ:ALLK), a smaller SBIO component, also appears on the Morgan Stanley list. Down 71.3% year-to-date, Allakos is a speculative name, but it does have some potential near-term catalysts.

The company expects to “hold an End-of-Phase 2 meeting with the FDA during second quarter of 2022 to discuss the Phase 2/3 KRYPTOS data and the development path with subcutaneous lirentelimab in patients with eosinophilic esophagitis (EoE),” according to a statement. “Initiate a Phase 2b randomized, double-blind, placebo-controlled study of subcutaneous lirentelimab in patients with chronic spontaneous urticaria in the middle of 2022.”