You are at:Home»ETF Building Blocks Channel»Scorching Summer Set to Put Solar Stocks in the Limelight 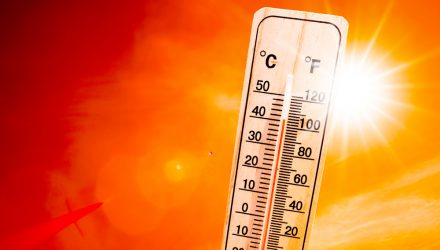 Scorching Summer Set to Put Solar Stocks in the Limelight

Helped by a rebound in growth stocks, the ALPS Clean Energy ETF (ACES) jumped 3.72% last week. Yet there’s more to the ACES story.

Soaring temperatures in the western part of the U.S., including in some places not known for exceptionally hot summer conditions, could put energy storage and solar equities back in focus.

Along the West Coast, California hasn’t seen credible rainfall for months and, last weekend, temperatures in Portland hit records for this time of year, moving well into triple digits and leading to excessive heat warnings. Further north in Seattle, temperatures also flirted with records while temperatures in much of Idaho and Montana eclipsed 90 degrees.

ACES Has the Right Mix for a Hot Summer

“In states where there’s time-of-use pricing, for example, the battery can be charged when electricity prices are low, and then power the home when prices are high,” reports Pippa Stevens for CNBC. “Additionally, in some states net metering — or when solar energy owners are credited for power they add to the grid — can make having a solar system with storage a particularly attractive option.”

As power grids throughout the U.S. come under duress and more consumers remember recent extreme weather events, such as wildfires in California and the blackout caused by freezing temperatures in Texas earlier this year, more consumers could be compelled to embrace residential solar and batteries for energy storage. Data suggest many are already doing just that.

Goldman Sachs “estimates that first quarter battery deployments jumped 155% year over year due to declining costs, greater solar adoption as well as consumers looking for grid reliability. The firm anticipates the market showing robust growth this year, and hitting $1 billion for the first time in 2022,” according to CNBC.

The ACES ETF allocates 23.46% of its weight to solar stocks – its largest industry exposure – 19.16% to energy efficiency, LED and smart grid names, and another 9.31% to electric vehicle/storage equities.

Some of Wall Street’s favored energy storage names include Enphase Energy (ENPH) and Sunrun (RUN). Those are the top two components in ACES and combine for almost 12% of the fund’s roster.