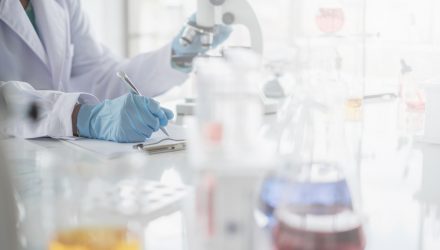 The ALPS Medical Breakthroughs ETF (SBIO) outpaced broader market indexes, as well as the competing SPDR S&P Biotech ETF (XBI) and iShares Biotechnology ETF (IBB), in a volatile last week for markets, according to a September 19 insight from ALPS.

Last week, SBIO notably outperformed XBI and IBB’s allocation of smaller biotech and defensive large-cap biotech names like Amgen and Moderna, despite the lower volatility these larger names should offer in a portfolio. Neither Amgen nor Moderna are holdings in SBIO.

SBIO’s U.S.-based allocation of biotech companies that have one or more drugs in either Phase II or Phase III of the U.S. Food and Drug Administration clinical trials are likely beneficiaries of the Biotechnology Initiative, with the policy support spread across SBIO’s treatment segments (DREEN, Rare & Orphan Diseases, Cancer, Cardiology & Hematology) sparking additional M&A opportunity and strengthening the drug pipeline for names in SBIO, according to ALPS.

The Department of Energy (DOE) also plans to announce an additional ~$178 million to advance innovative research efforts for U.S. biotechnology, which is not included in the initiative total spending, and should act as a future catalyst for SBIO and the biotech industry, according to ALPS.