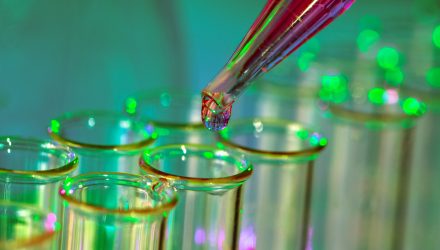 The small- and mid-cap biotech companies among SBIO’s holdings outperformed large-cap biotech indexes by nearly 200 bps last week on positive drug trial data for companies focused on immunotherapy, with their primary drugs in the later stages of the FDA clinical trial process, ALPS wrote in a recent insight.

The weakness that the biotech sector observed this year reversed on June 17 when rumors surfaced that Merck & Co. Inc. (MRK) — a top holding in the Apex Healthcare ETF (APXH) — was looking to buy one of the oldest immunotherapy companies in the sector, Seagen Inc. (SGEN), which is a top holding in the Principal Healthcare Innovators ETF (BTEC). More than 80% of SBIO holdings are focused on immunotherapy, causing the shares of the ETF to increase as investors bid up the space on the rumored news, according to ALPS.

Lower-than-expected M&A volumes in the first half of 2022 have caused uncertainty for biotech investors year-to-date, but recent positive trial data, declining SMID-cap biotech valuations, and improved free cash flows for pharmaceutical giants may act as positive tailwinds for further SMID-cap biotech acquisitions in 2022, according to ALPS.