You are at:Home»ETF Building Blocks Channel»Renewable Energy Tax Policy Could Be Boon for ACES 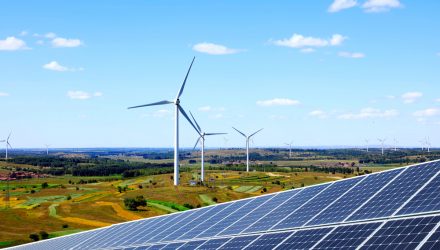 Renewable Energy Tax Policy Could Be Boon for ACES

Government spending plans are front and center on Capitol Hill as the two parties continue squabbling over the “human infrastructure” legislation and the significantly larger budget reconciliation package.

“House Democrats released the nearly 1,700-page Build Back Better Act on Oct. 28. The $1.75 trillion budget reconciliation package pared back total spending from an earlier version of the legislation, a response to moderate Democrats’ concerns about the initial bill’s $3.5 trillion price tag,” according to S&P Global Market Intelligence.

Investors considering renewable energy exchange traded funds, such as the ALPS Clean Energy ETF (ACES), should stay abreast of spending negotiations because there are some potentially impactful clauses in the legislation that could benefit renewable energy equities.

If approved and signed into law, the bill revealed on Oct. 28 “would bolster and extend existing tax credits for wind and solar power by five years, reflecting earlier legislation from the House Committee on Ways and Means. In addition, standalone energy storage projects and large new transmission lines would be able to qualify for federal investment tax credits, while nuclear plants could receive a new zero-emission production tax credit,” notes S&P Global.

That’s highly relevant to ACES investors because solar and wind equities are the largest and second-largest industry exposures in the fund, combining for nearly 44% of its weight. Some renewable energy experts and market observers view extensions of tax credits as essential to continue momentum on the solar adoption front.

Tax credits for wind are also important because offshore wind projects are usually costly, and states and operators seek any cost efficiencies possible. Indeed, the legislation is potentially beneficial to wind companies because it mandates that a significant portion of these projects have origins in the U.S. via domestically manufactured equipment.

This year, investors are learning that political spending negotiations are slow-moving. While it could take some time for some of the aforementioned proposals to come to life, the key for ACES is that politicians are committed to clean energy spending. That could be a plus over the long term. Plus, there are other near- to medium-term benefits in the current legislation.

“In a nod to the U.S. Senate’s tax-writing committee, the new bill would transition to providing technology-neutral tax credits for zero-emission electric facilities for a five-year period running through 2031, or until power sector emissions fall to a certain amount,” adds S&P Global. “The bill would also allow clean energy developers to claim the value of the credits through direct payments, opening up those incentives to a wider range of entities, including those that are tax-exempt.”