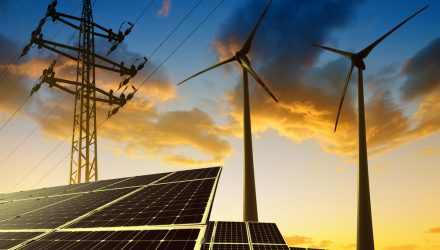 In 2021, politics didn’t pay off for renewable energy stocks and exchange traded funds as investors hoped for, but the White House is reaffirming its commitment to bringing more clean energy and related technologies to the U.S.

It remains to be seen if the ALPS Clean Energy ETF (ACES) and other funds in this category will respond in positive fashion, but it’s clear that the Biden administration remains bullish on renewable energy and isn’t shy about touting that agenda.

Among the ACES-related plans in the announcement is a significant focus on wind energy. ACES, which tracks the CIBC Atlas Clean Energy Index, allocates 21.15% of its weight to wind equities — the ETF’s second-largest industry exposure behind solar. The White House wants the U.S. to deploy 30 gigawatts (GW) of wind power by 2030 and is hoping to review 16 multi-billion dollar wind projects by 2025, several of them this year.

“The Department of the Interior is holding a record-breaking offshore wind lease sale, with the most lease areas ever offered, in the New York Bight off the coasts of New York and New Jersey. The upcoming lease sale is projected to generate up to 7 gigawatts (GW) of clean energy,” says the White House.

ACES allocates over a quarter of its weight to electric vehicle and energy storage names along with efficiency/LED/smart grid companies. Those exposures, which are often overlooked on the ACES roster because of the prominence of solar and wind, are priorities for President Biden, too.

“The Department of Energy is launching a new Building a Better Grid initiative to accelerate the deployment of new transmission lines—as enabled by the Bipartisan Infrastructure Law—to connect more Americans to cleaner, cheaper energy,” according to the statement.