You are at:Home»ETF Building Blocks Channel»Renewable Energy Spending Sizzles in First Half of 2021 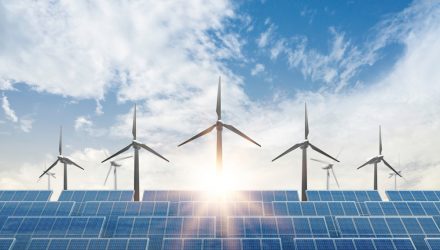 Renewable Energy Spending Sizzles in First Half of 2021

Renewable energy funds like the ALPS Clean Energy ETF (ACES) may have stumbled in the first six months of 2021, but those sticking these products could be rewarded for their patience.

The reason is simple. While some market participants opted to ring the register on ACES and clean energy equities in the first half, renewable energy spending soared to new heights. The long-term thesis for this group remains attractive.

“As much as $174 billion was spent on solar, offshore wind and other green technologies and companies in the period, according to data from BloombergNEF. While it’s 1.8% more than a year earlier, the level is 7% below the previous six months,” reports Will Mathis for Bloomberg.

While that dollar figure is large, it’s a drop in the bucket relative to what’s needed for companies and countries to reach ambitious net zero agendas over the coming years. Said another way, $174 billion in renewable energy spending in six months is much more of a floor than a ceiling.

While some investors were jittery with renewable energy stocks in the first half of the year, there’s no denying that companies and governments are increasingly committed to combating climate change.

“Renewable energy investment has withstood the effects of the global pandemic, in contrast to other sectors of the energy economy where we have seen unprecedented volatility,” said Albert Cheung, head of analysis at BNEF. “However, a 1.8% year-on-year increase is nothing to write home about. An immediate acceleration in funding is needed if we are to get on track for global net zero.”

Adding to the allure of clean energy investing is the wide variety of participants in this segment. Public market financing soared in the first half of 2021 and the same is true of capital from private equity and venture capital firms. Solar, ACES’s largest industry weight, saw nearly $79 billion in new investments in the first six months of 2021, according to Bloomberg.

That helped augment a decline in wind investing, the third-largest industry exposure in ACES. However, wind spending in the U.S. could tick higher in the near-term thanks to the infrastructure bill currently in Congress.