You are at:Home»ETF Building Blocks Channel»Renewable Energy ETFs Don’t Hinge on the Election 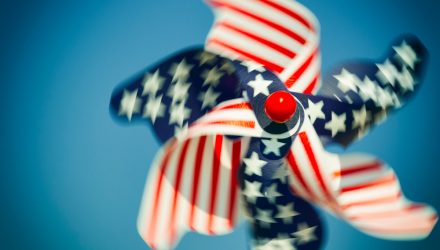 The ALPS Clean Energy ETF (ACES) is among the renewable energy exchange traded funds delivering stellar returns this year and while some data suggest this group of ETFs is levered to positive polling numbers for Democratic nominee Joe Biden, ACES doesn’t need a specific electoral outcome to be a long-term winner.

After all, the ALPS fund is performing well while President Trump is in the White House, indicating the political sensitivity of clean energy stocks is often overstated. Moreover, there are other trends bolstering the case for renewable energy assets.

The growth of wind and solar, which isn’t driven by the president, is relevant to ACES because the fund allocates about 45% of its total weight to companies in those industries. Investor sentiment matters, too.

“A significant shift in investor sentiment toward renewables already took place earlier this year when the collective market cap of clean energy stocks surpassed that of oil giant ExxonMobil,” according to U.S. Global Investors. “The clean energy group—which includes companies like Vestas Wind Systems, Plug Power, Sunrun and Siemens Gamesa Renewable Energy (SGRE)—is now valued at just under $200 billion, compared to Exxon at $145 billion. That’s down substantially from a market cap of half a trillion dollars in 2007.”

Underscoring the point that ACES doesn’t need Biden or any other politician to win is that domestic renewable energy adoption is often driven at the state level and there are deep international implications here, too.