You are at:Home»ETF Building Blocks Channel»Politics Could Again Power ACES 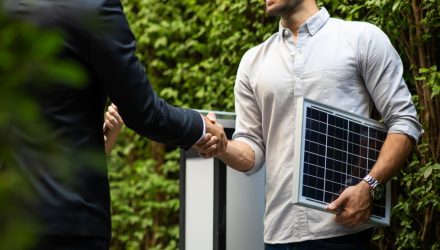 By now, many investors know the tale of the tape over the last 15 months or so for renewable energy exchange traded funds, including the ALPS Clean Energy ETF (ACES).

Last summer, ACES and friends started mounting jaw-dropping rallies, ascents that were fueled by candidate Joe Biden’s improving poll numbers in the 2020 presidential race. The thesis was simple: Biden wins, Democrats take a couple of seats in the Senate to claim a majority and let loose the renewable energy spending.

The first two scenarios were realized, but financial markets are disappointed by the lack of epic clean energy spending, explaining why ACES and competing ETFs are scuffling this year. Long-term investors shouldn’t fret because global governments, including the U.S., are still likely to spend massive amounts of money on clean energy.

That includes solar. As it is, solar costs are declining, leading to increasing adoption. Importantly, solar and other renewables’ costs have more room to decline. That’s a positive point when considering the scope of the Biden administration’s needs for solar and solar’s role in the president’s clean energy agenda.

“The Biden administration on Wednesday released a blueprint for producing almost half of the nation’s electricity from the sun by 2050 — something that would require the country to double the amount of solar energy installed every year over the next four years and then double it again by 2030,” reports Ivan Penn for the New York Times.

The potential impact to ACES is likely to be material because solar is the ALPS fund’s largest industry exposure. ACES has a 24.05% allocation to solar equities, or more than 400 basis points above wind, its second-largest industry weight.

Relevant to ACES is the fact that the aforementioned increases in solar aren’t as wild as they appear to be upon first glance.

“Such a large increase, laid out in an Energy Department report, is in line with what most climate scientists say is needed to stave off the worst effects of global warming. It would require a vast transformation in technology, the energy industry and the way people live,” according to the Times.

Biden also wants to expand use of wind power and is showing a willingness to spend to accommodate wind turbine expansion. Wind stocks account for almost 20% of ACES’ roster.