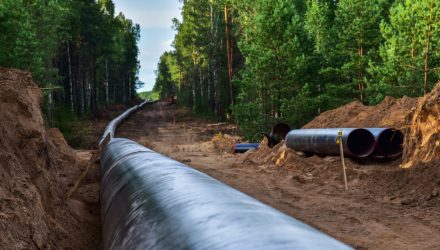 Midstream Is Starting to Mean Green

When investors think of the midstream energy segment, they typically think of oil and natural gas. After all, midstream energy companies operate the pipelines that transport those commodities and related storage facilities.

That is to say, many investors probably aren’t considering an asset such as the ALPS Alerian MLP ETF (NYSEArca: AMLP) as a play on renewable energy. They might want to alter that thinking because the midstream is playing an increasingly prominent role in the green energy boom, one that could benefit some AMLP holdings over the long-term.

“Decarbonization initiatives continue to broadly gather pace, and midstream companies are positioning to participate in opportunities stemming from the energy transition. With this backdrop, (the focus is) on the recent string of announced partnerships between midstream companies and a variety of other energy players, who are teaming up to leverage their respective expertise in solving challenges and ultimately capitalizing on the push towards cleaner energy,” says Alerian analyst Mauricio Samaniego.

Something that shouldn’t be overlooked regarding AMLP’s relevance in the renewable energy conversation is the aforementioned pipeline operational experience. This implies that some AMLP member firms are ideally suited for the transport of some important clean energy concepts.

“In particular, midstream assets are well suited for opportunities related to Carbon Capture, Utilization and Storage (CCUS), hydrogen, and renewable fuels, including renewable natural gas (RNG). The utility of midstream’s asset and expertise is evidenced by the number of partnerships announced recently between midstream names and other energy companies that are working towards clean energy solutions,” adds Samaniego.

Some AMLP holdings are already working to boost their renewables exposure.

“In Northern California, NuStar (NS) is supplying Neste’s SAF to area airports using its Selby terminal and an existing pipeline. The partners plan to make Selby a hub for renewable diesel and SAF,” notes Samaniego.

NuStar accounts for 3.72% of AMLP’s weight. Enterprise Products Partners (EPD), AMLP’s third-largest holding at a weight of nearly 10%, is another one of the ETF’s member firms that’s wading into renewables by way of a partnership with a legacy integrated oil company.

“Enterprise Products Partners (EPD) announced its partnership with Chevron (CVX) to study and evaluate opportunities around CCUS in the Mid-Continent and Gulf Coast. The collaboration will leverage EPD’s pipeline and storage footprint with Chevron’s sub-surface skill set,” says Alerian’s Samaniego.