You are at:Home»ETF Building Blocks Channel»The Message Is Clear: Green Energy ETFs Have Never Been Hotter 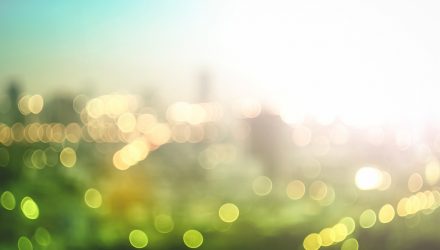 The Message Is Clear: Green Energy ETFs Have Never Been Hotter

No securities move up in linear fashion, but the ALPS Clean Energy ETF (ACES) is primed for even more long-term upside as renewable energy investments ramp up.

Setting the stage for ACES are expectations that in the coming decades, renewables will account for more power generation than fossil fuels.

“The U.S. Energy Information Administration (EIA) forecasts that power generation coming from renewable sources, such as wind, solar, hydro, and geothermal, should provide the majority of the world’s energy needs by 2050,” according to S&P Dow Jones Indices. “The use of renewable energy has been increasing significantly over the last decade, however its current level of consumption still lags those of traditional sources of energy.”

ACES Is More Than a Political Story

Renewable energy exchange traded funds such as ACES are often viewed through the lens of electoral politics. Undoubtedly the recent victories by President Biden and Democrats in the Georgia Senate races boosted the case for green energy stocks. But there’s more to the story.

“The primary driver behind the shift from traditional energy sources, such as petroleum, natural gas, and coal, to renewables comes from a ‘critical mass’ of governments around the world looking to adopt policies that seek to lower the global carbon footprint,” notes S&P Dow Jones.

A catalyst for ACES this year is increased ESG awareness in corporate America, which has only contributed to clean energy’s overall growth. Looking ahead, regulators could also lay out guidelines to help investors better invest in the green industry.

“Come 2050, electricity generation from renewables is expected to come from a well-diversified mix led by solar, wind, and hydro. Based on these projections, focusing on just one area of renewable energy would leave out significant exposure to the overall industry,” concludes S&P Dow Jones.