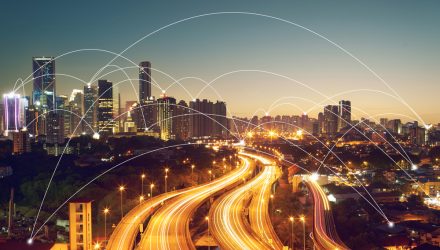 The energy sector is the best-performing group in the S&P 500 this year. That’s the good news.

The bad news, however, is that pure beta broad market index funds and exchange traded funds don’t offer much energy exposure anymore. These days, energy accounts for less than 3% of the S&P 500. Only three sectors have smaller weights in the benchmark domestic equity gauge. That’s the result of some deep oil bear markets over the years.

What might come as a surprise to some investors is that traditional value funds aren’t exactly swelling with energy exposure, despite the fact that the sector is often framed as a value destination. For example, the S&P 500 Value Index allocates just 6.3% of its weight to energy. Six other sectors command larger weights in that widely followed gauge.

A prime avenue for dealing with that scenario while not going all-in on energy is the ALPS Sector Dividend Dogs ETF (SDOG).

“Large-value funds on average invest the most in energy, and the data do show a correlation between energy exposure and performance. That said, even among large-value funds, energy is often a relatively small stake these days compared with other sectors. Even in a year of record performance, energy was often not the leading performance driver,” says Morningstar analyst Benjamin Supekci.

For its part, SDOG equally weights 10 of the 11 S&P 500 sectors (real estate is the excluded one). Today, energy is SDOG’s largest sector allocation at 11.64%, nearly 100 basis points ahead of financial services. SDOG’s higher energy profile is proving meaningful this year.

“Large-value funds with higher weights in energy tended to have higher returns for the year through September. For example, large-value funds that landed in the top 20% when it came to energy exposure returned 19.4% for the year to date. Those with energy stakes in the bottom quintile returned an average of 15.3%,” adds Supecki.

That sentiment is playing out with SDOG as the ALPS fund is topping the S&P 500 Value Index by 125 basis points on a year-to-date as of Oct. 13.