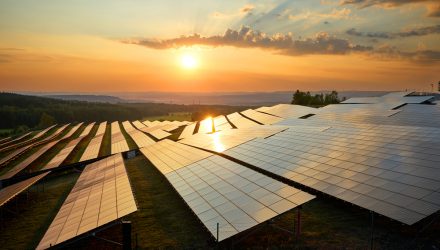 The ALPS Clean Energy ETF (ACES) isn’t short of catalysts this year and one of the primary drivers of the ETF’s scintillating showing is solar.

ACES is one of the more diverse renewable energy ETFs on the market, providing exposure to multiple clean energy industries, but solar is one of its largest industry-level allocations.

As the world moves more towards renewable energy sources, solar energy could be one of the main beneficiaries. According to a “United States Solar Energy Market – Growth, Trends, and Forecasts (2020 – 2025)” report, more growth is ahead over the next five years.

ACES Has Data on Its Side

This year, solar is a dominant force for renewable energy investors.

“A bright spot in the energy complex, solar stocks are on a tear this year, with some companies at all-time highs,” writes Debbie Carlson for The Ticker Tape. “Solar is also outpacing other forms of renewable energy, such as wind. Wind company stocks are strong, but they haven’t seen gains like solar.”

“Ben Watson, education coach at TD Ameritrade, observed that (on the surface) there are two reasons why solar companies are besting fossil fuel companies,” reports the Ticker Tape. “First, solar panel costs are falling, and homebuilders who are doing new construction are incorporating solar. There’s also greater acceptance of renewable energy for both new construction and retrofits. Second, rock-bottom interest rates benefit solar panel manufacturers like RUN and SEDG as well as panel installers because they’re able to leverage debt to install products. “They’ve figured out their recapture costs down the road based on these low interest rates,” Watson said, explaining the resurgence in solar companies since March.”