You are at:Home»ETF Building Blocks Channel»ETFs to Capitalize on the Energy Transition 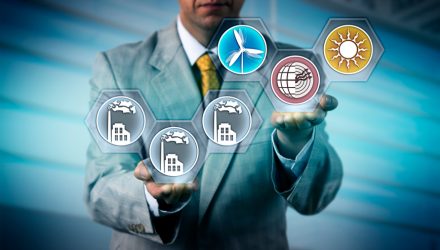 ETFs to Capitalize on the Energy Transition

As investors consider the disruptive shift from traditional sources of energy, they can take a look at an exchange traded fund investment opportunity to position their portfolios for this change.

In the recent webcast, More Than Just Renewables: Hidden ETF Opportunities in the Energy Transition, Andy Hicks, senior vice president and director of ETF portfolio management and research at SS&C ALPS Advisors, highlighted the fact that the energy transition to net zero is already underway, with many global economies pledging their support to reduce harmful greenhouse gas emissions in an attempt to get a better handle on the damaging effects of climate change.

The energy transition will touch upon many sectors across the world. Many industries will be affected, including power, rail, aviation, shipping, roads, commercial, residential, and others, Hicks added. Specifically, the coal industry will be among the worst losers in the energy transition, as the energy source is one of the worst contributors to harmful CO2 emissions.

On the other hand, Hicks noted that natural gas will be considered a major stopgap in the energy transition as the world slowly weans itself off fossil fuels. Consequently, while dirtier fossil fuel sources like coal may see a falloff in production, natural gas production may continue to increase for a while. There has already been a surge in natural gas demand as prices skyrocketed this year, with a jump in exports of liquefied natural gas to European markets.

Meanwhile, innovation will continue to support the energy transition with adoption of cleaner energy sources like hydrogen fuel cells and biofuels, among others. For instance, Paul Baiocchi, chief ETF strategist at SS&C ALPS Advisors, pointed out that biofuel demand is expected to rise 28% through 2026.

Baiocchi also pointed out that electric vehicles are hitting an inflection point where battery-powered electric vehicle sales could begin to outstrip traditional internal combustion automobile sales, especially with regulatory changes that limit or completely end the sale of crude oil-powered cars in the near future.

Midstream companies like those found in the Alerian MLP ETF (AMLP) and the Alerian Energy Infrastructure ETF (ENFR) can help investors maintain exposure to traditional energy companies that are helping the country make the transition away from fossil fuels. These midstream companies will continue to transport energy, like natural gas, through their pipeline networks.

ACES could capitalize on the significant growth potential as the shift to a cleaner energy mix accelerates and broad-based policy support continues to underpin demand.

ACES’ underlying index has a differentiated approach to investing in the sector. First, by narrowing the list of constituents to companies whose primary operations are focused on clean energy, the fund offers more pure-play exposure to the sector. Second, constituents are diversified across the sector, offering exposure to the full opportunity set of this transition and minimizing the risk of investing in a single sub-segment. Lastly, focusing on U.S. and Canadian-based companies helps to further minimize the risk of investing in a global industry by reducing risks related to foreign holdings, including currency exchange rates, financial disclosures, and regulatory and policy changes.

Financial advisors who are interested in learning more about the clean energy transition can watch the webcast here on demand.

vettafi.com is owned by VettaFi, which also owns the index provider for AMLP and ENFR. VettaFi is not the sponsor of AMLP and ENFR, but VettaFi’s affiliate receives an index licensing fee from the ETF sponsor.