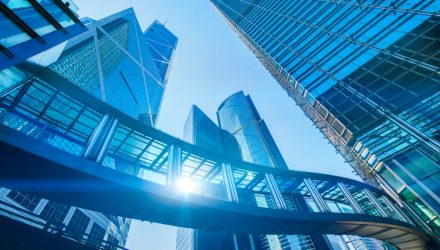 Infrastructure ETFs can’t have all the fun as the topic garners more attention with Election Day nearing. An alternative on this front is the Alerian Energy Infrastructure ETF (ENFR) because midstream energy assets are vital in the broader infrastructure equation.

“House Democrats have passed major energy infrastructure legislation, President Trump has expressed interest in an ambitious infrastructure bill, and the key Senate Environment and Public Works Committee has already passed significant legislation,” reports The Hill. “While these various approaches have many important differences, the need to create jobs and prime the economic pump in an election year suggests a bipartisan economic stimulus deal with energy at its core could still happen.”

Moreover, these services are under long-term contracts. Master Limited Partnerships charge a fee for each barrel of petroleum or MMcf of natural gas transported. This covers smaller pipelines connecting wells to hubs or processing facilities for natural gas, which are more sensitive to production dynamics, along with Larger, longer pipelines that connect hubs or producing regions with end markets. These MLPs typically charge rent for third parties to use storage tanks.

“Energy is a key element of infrastructure for modern economies and is uniquely positioned to create jobs and growth. While the energy industry employs about five percent of the U.S. workforce, the energy sector has created more than 10 percent of all new jobs over the past five years,” according to The Hill.

Increasing the allure of ENFR is that only allocates about a quarter of its weight to MLPs, a strategy that avoids some of the tax complexities associated with dedicated MLP strategies. Additionally, some of ENFR’s midstream holdings are positioned for growth in the renewable energy arena, a trait many investors don’t think of when considering this asset class, but one that’s vital to the long-term infrastructure thesis.

“As countries around the world transition to a low-carbon economy, modernizing the U.S. energy system will not only put many Americans back to work but also position the country for stronger economic competitiveness and environmental security for decades to come,” according to the Hill.