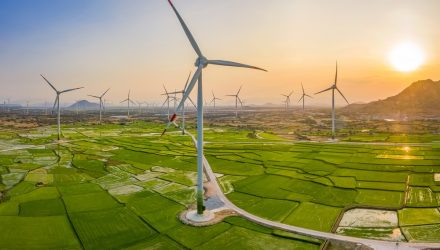 Clean Energy Is No Longer an ESG Issue, It’s a National Security Issue

Clean energy is no longer just an ESG issue but has expanded into an issue of national security in the face of the energy crisis.

“I think the markets truthfully are missing this aspect to national security because, with that in mind, this train doesn’t stop. This is not a trend anymore,” Andy Hicks, director of ETF portfolio management and research at SS&C ALPS Advisors, said on October 18 during How the Energy Crisis is Fueling Clean Energy Opportunities.

“This is certainly something that we view going forward the next couple of decades to be the top growth theme out of anything: cybersecurity, cloud computing, you name it. Clean energy just has just astronomical growth behind it,” Hicks added.

According to BloombergNEF, achieving net-zero carbon emissions by 2050 will require as much as $173 trillion in global investments in the energy transition. This will require a huge reinvention of how things are currently powered and transported, Hicks said. The replacement cycle that will occur over the next couple of decades to meet these targets is astronomical.

“From rail, aviation, shipping, petrochemicals, all these different industries outside of just powering your home… That has to be transitioned into a zero carbon structure, and so that is a huge investment cycle that we see coming up,” Hicks said. “Costs have come down to make this an economical feat and not just an idealistic type of endeavor.”

Hicks said the $173 trillion figure is not just going to be directed toward solar or wind, two of the more common clean energy segments. Instead, all different resources or energy segments will need to be utilized, which includes hydro/geothermal, bioenergy, fuel cell/ hydrogen, batteries, as well as wind and solar – all of which can be accessed with the ALPS Clean Energy ETF (ACES).

ACES focuses on pure-play clean energy companies, Hicks said. “It doesn’t make sense to put semiconductors in here, anything that’s ancillary to the space, even if they have tangential businesses,” he added. “We want to make sure these companies are truly clean energy.”

ACES is a dynamic fund, prepared to deliver the optimal exposure for the current environment.

“It’s going to evolve its weightings to these various themes… as the market opportunity for these companies continues to evolve, as the weight of these companies in the market continues to evolve, as the relative market caps continue to ebb and flow,” Baiocchi said. “By design, with the smart index methodology that our partners created with ACES, it gives you a textured view of renewable energy, but one that is going to be living and breathing over the course of the next few decades.”

Importantly, ACES has a U.S. and Canadian focus, as in the latest drawdown, European wind companies have been destroyed, along with Chinese clean energy companies.

“We want to avoid some of these companies that are essentially just massively over-levered with debt,” Hicks said. “That’s kind of that implicit characteristic of some of those foreign companies, so that’s why we chose to stay within the US. and Canada and this product.”

Financial advisors interested in learning more about the clean energy sector can watch the webcast here on demand.