You are at:Home»ETF Building Blocks Channel»Call on ACES for Clean Energy’s 2022 Comeback 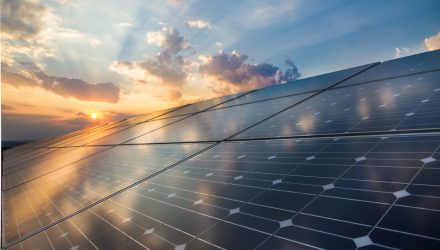 There was no shortage of disappointment to go around in the renewable energy investing space this year. That disappointment is giving way to 2022 optimism.

Should those cheery views pay off, exchange traded funds like the ALPS Clean Energy ETF (ACES) could regain the stellar form seen in 2020. Renewable energy stocks, including some ACES components, are often pricey, but some market observers see that situation abating.

“Having seen some moderation of valuation metrics for the group during the year, we are also seeing improving fundamentals and evidence that long-term growth in the sector will not be derailed,” writes Oppenheimer in a recent note to clients. “We are continuing to see technology evolution and convergence drive efficiency in individual supply chains and, in turn, drive shareholder value.”

Among the ACES holdings Oppenheimer is bullish on is Plug Power (PLUG), which accounts for almost 4.6% of the ETF’s weight.

“Plug is really going to be a hydrogen fuel company on a go forward basis as it leverages its fuel cell technology,” said Oppenheimer analyst Colin Rusch in an interview with CNBC. “With Plug it’s really a lot of execution here. They are growing out a large network of hydrogen fuel assets, and we’re just seeing the first part of that execution happen late this year and early next year.”

“We believe ENPH is the clear leader in microinverters and continues to grow with core markets while expanding its addressable market segments,” added Rusch. “We expect ENPH’s energy storage solution to gain meaningful traction… as the company begins to sell on three continents and, in our view, is likely to drive upside to the shares.”

Should that optimistic outlook be validated, it could be material to ACES because Enphase is 4.61% of the fund’s weight and the ETF devotes 21.14% of its weight to solar stocks — its largest industry exposure.

Other ACES member firms highlighted by Oppenheimer include Ameresco and NextEra Energy Partners.  NextEra is the ETF’s third-largest holding at a weight of 5.23%, while Ameresco commands a weight of 2.50% in the fund.