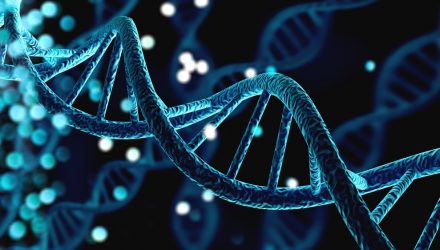 Amid a rebound in growth equities last week, biotech stocks and exchange traded funds got in on the act, and that could be a positive sign for a group that’s long been slumbering.

For example, the ALPS Medical Breakthroughs ETF (SBIO) jumped 7.54% last week. Alone, that’s an impressive run, but it’s even more notable when taking into account the fact that SBIO’s bullishness during the third of week helped the fund take out its 20-day moving average and peek above its 50-day line.

Strength in SBIO is all the more relevant for investors hoping for a credible biotech rebound because the ALPS fund tracks the S-Network Medical Breakthroughs Index, which caps member firms at market values of $5 billion at the time of inclusions, meaning the ETF is a good way of gauging sentiment toward smaller biotech equities. There are reasons to believe that SBIO has more upside potential.

“But the sector is not defeated. Many biotech stocks are trading well below their long-term business value, giving investors an opportunity to enter at unusually low prices,” reports the South China Morning Post.

Part of the woes encountered by the broader biotech complex over the past year-plus are problems that SBIO largely avoids. For example, an array of pre-clinical companies went public after lofty multiples, making those stocks vulnerable to selling pressures when trial data didn’t pan out in positive fashion. SBIO member firms are far from pre-clinical, as a requirement of the fund’s index is that components have at least one drug or therapy in Phase II or III trials prior to joining the benchmark.

“Whereas biotech drawdowns typically persisted for less than 70 trading days and chalked up a 28 per cent loss, this pullback is much deeper at more than 240 days. Many companies now trade below the cash value on their balance sheets, and biotech’s average forward price-to-earnings ratio lags that of the S&P 500 and the sector’s long-term average,” according to the South China Morning Post.

The point about cash is highly relevant when evaluating SBIO because the fund’s holdings must have enough capital to survive two years at current burn rates. Rival funds don’t feature that mandate. Plus, cash is always attractive.

“Low valuations and a cash-rich biopharmaceutical industry could also drive mergers and acquisitions. Last year, biopharma M&A activity dropped to US$108 billion, among its lowest in a decade, from US$261 billion in 2019. Accordingly, some estimate that large-cap firms could have US$500 billion cash to spend by the end of this year,” notes the Chinese newspaper.