You are at:Home»ETF Building Blocks Channel»Banks Turn Bullish on Airline Stocks, Jump in With JRNY 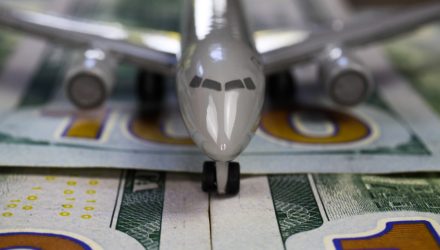 Banks Turn Bullish on Airline Stocks, Jump in With JRNY

As the 2020 coronavirus bear market reminds investors, airline equities can be vexing propositions, but the group does offer some near- to medium-term potential.

For investors that want to capitalize on that trend without a full commitment, the ALPS Global Travel Beneficiaries ETF (NYSEARCA: JRNY) stands as a credible idea. Newly minted, JRNY isn’t a dedicated airline exchange traded fund, but the rookie ETF gets investors into the airline equity game without the risks of picking individual names in this often-volatile industry.

In other words, JRNY could prove useful for investors at a time when some analysts are increasingly enthusiastic about the prospects for oft-maligned airline stocks.

“The rally for airline stocks should soon kick back into gear, and Southwest Airlines could be a winner for investors, according to Barclays,” reports Jesse Pound for CNBC. “Analyst Brandon Oglenski upgraded the North American Airlines sector to positive from neutral, even as uncertainty remains around the return of business travel. Oglenski also upgraded Southwest to overweight from equal weight.”

Vital to JRNY airline holdings such as Delta, American (NASDAQ:AAL), and United (NASDAQ:UAL) is improvement in global coronavirus vaccinations because the U.S. is set to reopen its borders next month to vaccinated travelers from 33 countries, including Brazil, China, and some European nations.

That could pave the way for carriers to again capitalize on the higher-margin international routes they had to halt at the start of the coronavirus pandemic, and that could ultimately help JRNY gain some altitude.