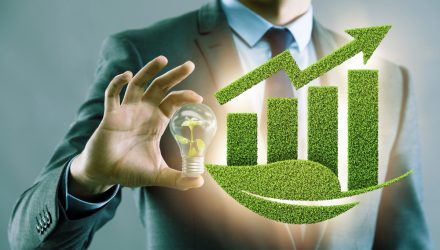 ACES increased 7.55% during the one-week period trailing October 28, a reversal from its negative performance earlier in the month due to higher interest rates and weak economic growth darkening the outlook for clean energy companies.

Clean energy stocks soared following Senator Joe Manchin’s late support for a deal that would serve as a major step forward in the energy transition away from fossil fuels.

The bill was passed as the U.S. Inflation Reduction Act in August, bringing the U.S. to the forefront of clean energy initiatives that will unequivocally lead other major nations to put in place more specific initiatives, ALPS wrote in August.

ACES’ pure-play methodology offers exposure to only U.S. and Canadian companies across seven distinct clean energy segments that will all directly benefit from the tax credits included in the bill.

Clean energy stocks have declined since their summer rally but look to be recovering losses during the past week. With spending on clean energy initiatives poised to increase drastically, now might be an ideal time to allocate to a clean energy ETF while they are still undervalued and priced low.

In September, ACES notably took in the most inflows across ALPS’ lineup of ETFs, bringing in $10 million during the month. The fund has seen $49 million in outflows year to date, according to VettaFi.

ACES charges an expense ratio of 55 basis points and has $677 million in assets under management, according to VettaFi.