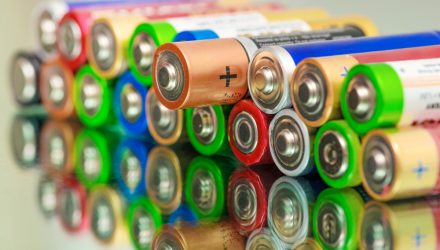 One of the primary benefits offered by the ALPS Clean Energy ETF (ACES) is broad reach into the renewable energy ecosystem.

The ALPS exchange traded fund features exposure to multiple renewable energy themes, including staples such as wind and solar, as well as concepts that are still in their formative stages. Those include bioenergy, fuel cells, hydropower, and energy management and storage, among others.

ACES allocates 14.35% of its weight to electric vehicle and energy storage names — a relevant trait because battery storage is at the epicenter of future growth for those industries.

“Battery storage is a key piece of the energy transition, and we believe a combination of improving economics, renewables growth and decarbonization policy initiatives across the globe are poised to drive a significant inflection in adoption in the coming decade,” said Goldman Sachs in a recent note.

Battery exposure in ACES is meaningful for long-term investors because this is a space with a compelling growth trajectory.

“Goldman believes the market will post a compound annual growth rate of 30% over the next decade, expanding to a total addressable market above $200 billion. This translates to a revenue opportunity of $33 billion by 2030, up from $5 billion in 2020,” reports Pippa Stevens for CNBC.

Due to the obvious intersection of electric vehicles by way of home charging with battery storage and energy management, Tesla (NASDAQ:TSLA) is the second-largest component in ACES at a weight of 7.2%.

“We forecast Tesla’s storage deployments…will grow at a 30%+ CAGR [compound annual growth rate] through 2023,” notes Goldman. “We believe Tesla’s storage business underscores the benefits of a tightly integrated hardware and software approach, which enables Tesla to achieve market-leading energy density and improve its products over time with OTA [over-the-air] updates.”

ACES’ battery storage exposure doesn’t begin and end with Tesla. Several other of the ETF’s holdings are in on this act, too. Those include Enphase Energy (NASDAQ:ENPH).

Enphase is the third-largest holding in ACES at a weight of 6.85%. Stem (STEM), a maker of battery storage software, is another name highlighted by Goldman. That stock accounts for more than 2% of the ACES roster.