You are at:Home»ETF Building Blocks Channel»Alternative Energy ETFs not as Politically Sensitive as Some Believe 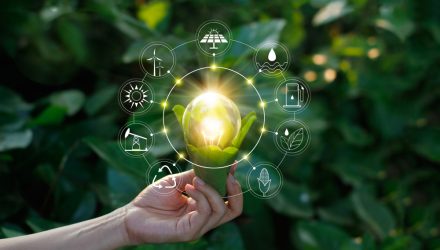 Alternative Energy ETFs not as Politically Sensitive as Some Believe

Fortunately, ACES is defying that logic as it’s soaring with a Republican in the White House and that trend could continue regardless of the outcome of the upcoming election.

“The last four years have shown that the renewable energy industry is resilient; tailwinds from declining technology costs and from years of federal tax credits, which have received bipartisan support, have simply been too strong,” reports Jinjoo Lee for the Wall Street Journal. “Despite President Trump’s public skepticism about environmental goals, renewable energy companies’ values and installations have been rising at a healthy clip.”

“At the same time, solar and wind generation increased more than 40%. Tariffs on imported solar panels, which Mr. Trump introduced in 2018, didn’t do lasting damage, either,” according to the Journal. “The trade barriers weren’t enough to damp appetite from the U.S. solar market, according to a report from Wood Mackenzie, which noted that imports of Chinese solar modules rose since early 2019 despite tariffs.”

The growth of wind and solar, which isn’t driven by the president, is relevant to ACES because the fund allocates about 45% of its total weight to companies in those industries.

Producers of wind power are working to bolster efficiency with the aim of creating economies of scale that reduce costs and boost output. Should those objectives be realized, wind could add to its already-dominant renewables perch while continuing to steal market share from traditional fossil fuels.