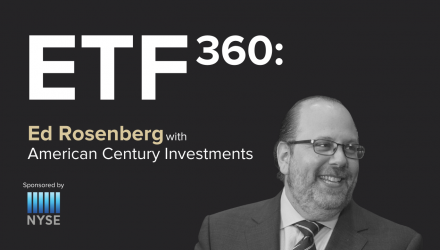 For this episode of ETF 360, ETF Trends’ CEO Tom Lydon speaks with Ed Rosenberg, senior vice president and head of ETFs at American Century Investments, to discuss investing in bond ETFs in a rising rate environment.

Rosenberg explains that the Bloomberg Aggregate Bond Index dropping more than 6% in the first quarter has created an environment of opportunity for returns on “normal investments.” Investing in bonds allows for a steady income flow for investors, but investing in current environments of rising rates requires being much more careful when investing in the bond space.

“You need to be more selective; you need to look for things that create higher yield, potentially active is even better in this environment, and that has a shorter duration to prepare for those rate hikes because we want to take advantage of those yields but not necessarily get hurt on the principle,” Rosenberg says.

One of the key areas to avoid within fixed income as interest rates rise is U.S. Treasuries and any related areas of exposure. Instead, investors should look to credit, particularly within investment-grade and high yield, and Rosenberg recommends finding funds where the fund’s team does their own analysis instead of relying on credit rating agencies. This allows them to potentially get in front of changes and identify better-performing companies.

Rosenberg also recommends emerging markets as an option for investors to allocate to.

“Now, that sounds strange with what’s going on right now, but a lot of emerging market countries have a really good credit rating, just not as good as the U.S., so that forces them to offer things at a higher yield to attract investors to that debt,” Rosenberg says.

Preferred credit and convertibles are also areas that tend not to receive as much attention but should be considered by investors because they provide income opportunities within convertibles and higher-yielding potential within shorter-duration preferreds, which tend to be less correlated to interest rates.

The American Century Multisector Income ETF (MUSI) offers exposure to a wide range of fixed-income options such as high yield, emerging markets, and preferreds and is actively managed.

“What’s important about that is that a manager in an active fund, especially this one, is turning the dial to the places that make sense,” Rosenberg explains. “As the environment changes, as the Fed raises rates, it’s on the short end.”

MUSI carries a higher yield with a shorter duration (the option-adjusted duration is around 3.25 years) than many of the Agg-centric funds on the market today. It is also a diversified ETF; as of the end of the last quarter, MUSI owned close to 225 different bonds chosen through a highly selective process by the portfolio manager.

As more advisors move away from the traditional 60/40 portfolio and explore alternatives, MUSI is a fund that holds much appeal.

“The advisors are actually excited because this is a newer space in the ETF world. They’re excited that there’s a product like this, that they can still talk to their clients about owning fixed income but owning it in a different way,” Rosenberg says. “Is the risk a little higher than something like the Agg? Absolutely, but it’s that tradeoff, that risk/reward tradeoff for the yield they’re really looking for.”