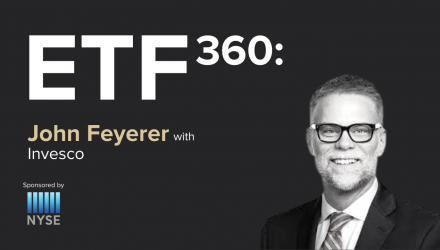 For this week’s episode of ETF 360, ETF Trends CEO Tom Lydon and CIO Dave Nadig caught up with John Feyerer, Sr. Director of ETF Product Strategy at Invesco., to discuss concentrated indexes and the strength of RSP.

Looking at the success of the S&P 500 in the last decade, it’s really only a small number of stocks that made up most of the gain. With that in mind, addressing whether or not that’s a concern for investors, Feyerer points out how the last year, alone, before the run-up that’s been seen, the index was historically concentrated. The technology bubble is constantly used as an example of the time in which the index has been most concentrated.

As Feyerer explains, “What’s interesting is when you take a look back a year ago, before this most significant run-up, it was already historically concentrated. What’s even seen in the last year is that it actually far surpasses that to the point now that the top ten stocks in the S&P 500 are actually approaching 30% of the index.”

Looking at expectations for the tech bubble, given its history, Feyerer points out how the fundamentals of those companies are much stronger than they used to be. Looking across history with instances where there were instances of the concentration spiking up, and then, ten years later, the top names inevitably fell off. 20 years later, however, only one of the top names remains. So, it seems as though there’s a consistent pattern when it comes to the biggest names in the index that don’t carry that forward down the road.

It All Comes Around

When looking at the prospect of smaller companies pumping up their weight to make a comeback, Feyerer notes how looking at the cyclical nature of cap-weighted versus more an equal weight has Invesco expecting an economic resurgence while moving through what’s hopefully the tail end of the Covid-19 crisis.

“If you look at that verses what we saw last year, which was obviously a very narrow market and one that was led by those mega-cap tech companies,” Feyerer continued, “We do think we’re going to see a swing at some point, and the signals are pointing to that sooner rather than later.”

With Nadig noting how Invesco was one of the first companies with anything that wasn’t cap-weighted, it’s important to look at the Invesco S&P 500 Equal Weight ETF (RSP). As Feyerer explains, RSP started the discussion when it comes to terms such as smart beta or strategic beta. It was one of the first strategies to alternatively weight, and it did it with the S&P 500. However, over time, with an 18-year track record, it not only provides an opportunity to compare it versus certain benchmarks, but it actually compares to a universe of active managers that it’s classified against.

“We like to think of RSP as an opportunity for investors to take the concentration out of the S&P 500. So, these issues we’re talking about today provides investors a great tool to do exactly that and to be able to adjust their portfolio accordingly, so they don’t necessarily have that mega-cap concentration within their portfolio.”