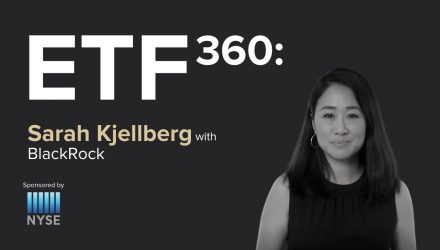 For this week’s episode of ETF 360, ETF Trends CEO Tom Lydon and CIO Dave Nadig spoke with Sarah Kjellberg, Head of US iShares Sustainable ETFs for BlackRock, who discusses the process of integrating ESG into finance, specifically with climate considerations, to help create a low-carbon economy.

With strong momentum in ESG across the industry, Kjellberg discusses some of the key developments regarding climate. Broadly speaking, Kjellberg notes a number of major tailwinds that have been steering the ship toward sustainable investing. Examples include technological innovations, changes in demographics, increased regulations globally, and the evolving view around risk.

There are flows on the development side for BlackRock, which have come in record numbers this year. Another example revolves around product availability. As Kjellberg notes: “There are 400 sustainable ETFs and mutual funds available today, 22 new ETFs that were launched so far this year. And we’re seeing more and more wealth firms placing priority around sustainable product approvals and in models, which is really leading to greater access and choice for advisors and investors.”

One more example on the development side is the greater focus on the climate. There’s been a dramatic acceleration when considering the net-zero commitments, one hundred governments over a thousand companies that are really pledging to reach net-zero, including BlackRock earlier this year.

Kjellberg adds, “if you take a step back and think about it, it’s going to take an estimated $50-100 trillion in capital investments to really transition to a low carbon economy.”

It’s looked at in a few ways, as Kjellberg notes. The first is broadly considered through ESG within core allocations. With advisors now thinking about moving away from traditional market cap-weighted exposures and ESG ETFs that continue to provide broad market exposures, there’s a better chance of achieving a more sustainable outcome. It means gaining a reduction of carbon intensity anywhere between 35-60%.

Another way is tactical allocation to themes. This is what investors are generally thinking about in sustainability when it comes to ETFs. Themes such as clean energy, electric vehicles, and other areas that can be embraced by larger wealth teams allow for consideration for a future portfolio that is a combination of thematic/trending ETFs alongside ESG.

Looking at some of the carbon ETFs recently launched by BlackRock, the BlackRock U.S. Carbon Transition Readiness ETF (LCTU) and the BlackRock World ex U.S. Carbon Transition Readiness ETF (LCTD) are low carbon transition ETFs. These serve as an example of BlackRock’s commitment to a shared vision to transfer to a low-carbon economy and making the strategy available to all investors. These funds attempt to capture the risks and opportunities associated with this long-term transition in one strategy.

As Kjellberg explains: “What we’re seeking to do is measure a company’s exposure and their management to climate transition. So, the portfolios will tilt towards those companies that are going to be better positioned.”

Thinking about it within a portfolio, these strategies are transparent, active ETFs. They are optimized to minimize the deviation away from the benchmarks like the Russell 1000 and the MSCI World XUS. The ETFs are broadly diversified, sector neutral, and can be considered core exposures in both the U.S. and the international developed allocations within a portfolio.