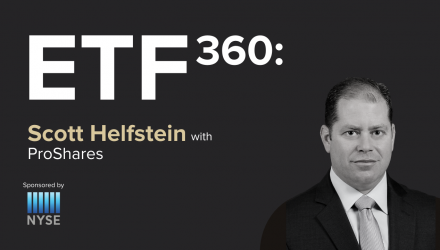 June 21 and 22 is when to look into some big deals on the internet retail giant. Lydon asked Helfstein about what’s going on with retail sales, given the pandemic, and how the momentum has shifted. Helfstein explained how 2021 has been a fascinating ride, given everything. In particular, he explains how before the pandemic, e-commerce made up around 11% of retail sales in the U.S. During the pandemic, sales peaked at 16%. Currently, things are settled at around 14%.

“We think we’ve hit a short-term steady-state, but the long-term growth is absolutely phenomenal,” Helfstein added.

It’s clear that the market has held onto the gains. Quarter over quarter, there’s still money to be made in e-commerce. These are big numbers across categories, but still only so much of a percentage of total retail.

Helfstein highlighted the consumer discretionary segment as a means to access growth in the retail space.

“The e-commerce segment of consumer discretionary over the last decade has grown sales per share at 8x the rate for the rest of the consumer segment, and it now has the best consumer margins at 6% of all the industries that make up consumer discretionary, So, people who think they are getting a healthy dose, are actually getting 35%, and not the lion’s share. So, if you are interested in e-commerce, there are better ways to really target that.”

In 2019, Amazon sold 170 million products over the course of its Prime Day campaign, which is the equivalent of selling 2,000 items per second. Helfstein pointed out the ProShares Online Retail ETF (ONLN) as an ETF to keep up with these sales.

ONLN has a couple of distinguishing features. First, it has a modified market cap weight, meaning it has a large dose of Amazon for investors, among other larger areas that fit into the current narrative. The other main aspect is the focus on digital natives. This means focusing on large retailers built out of the online space, as opposed to something more brick-and-mortar-based like Walmart. These online retailers are ultimately driving margins higher, unlike the the traditional stores moving online at the expense of their bottom lines.