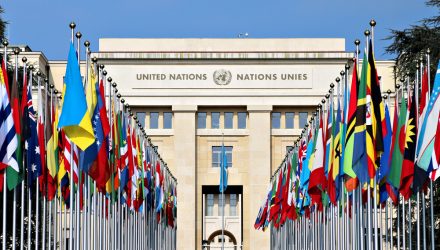 At the United Nations General Assembly, President Joe Biden said that he would work with Congress to double funding to help developing countries fight against climate change.

Biden has pledged to double funds to $11.4 billion per year by 2024 to support developing nations shifting away from more dirty energy sources like coal, adding to the global goal of $100 billion per year in support of climate change action for vulnerable countries, Reuters reports.

“The best part is, making these ambitious investments isn’t just good climate policy, it’s a chance for each of our countries to invest in ourselves and our own future,” Biden told the annual gathering of world leaders.

Biden’s commitment comes six weeks ahead of the Oct. 31 to Nov. 12 COP26 Climate Change Conference in Glasgow, Scotland. The President’s climate change agenda is largely tied to his ambitious infrastructure and budget legislation, which is still under intense negotiation in Congress, exposing Biden to the risk that he could arrive at the summit with no real backing.

British Prime Minister Boris Johnson argued that meeting the climate finance target will build trust between developing and developed countries ahead of new negotiations after developed nations failed to meet the initial $100 billion per year pledge by their original goal of 2020.

Developing countries have been urging more advanced economies to provide financial aid to help them transition to clean energy technologies and fight against the negative impacts of climate change.

“President Biden’s commitment to scaling up international climate finance to $11.4 billion per year by 2024 is a welcome and much-needed sign that the United States is finally taking its global climate responsibilities seriously,” Rachel Cleetus, policy director at the Union of Concerned Scientists, told Reuters.

However, some critics warned that it is not enough.

“The US is still woefully short of what it owes and this needs to be increased urgently,” Mohamed Adow, director of Power Shift Africa, told Reuters.