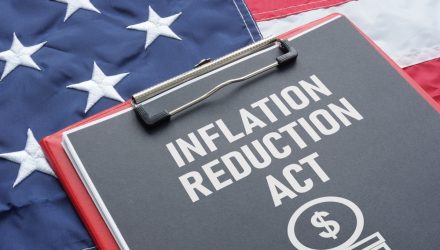 The Inflation Reduction Act being signed into law is in the rearview mirror, and growth stocks are faltering anew, but there’s still reason to believe that the legislation will profoundly impact renewable energy equities over the long haul.

That could be good news for the exchange traded funds sporting allocations to stocks that are potential beneficiaries of the Inflation Reduction Act. Of course, not all renewable energy and clean technology ETFs adequately answer that call. One that does is the SPDR Kensho Clean Power ETF (CNRG).

While CNRG and several of its rivals have been on the receiving end of ample praise in the wake of the Inflation Reduction Act being signed into law, deeper examination is warranted. Fortunately, CNRG passes with flying colors due to the right exposure and methodology, including allocations to First Solar (NASDAQ:FSLR) and Plug Power (NYSE:PLUG).

Specific to First Solar, it makes for a predictable winner under the aforementioned legislation because the bill prioritizes solar investments, among others.

“The Inflation Reduction Act includes a 10-year extension for solar power credits, which is significant as the prior incentives were going to roll off over the next couple of years. According to Morningstar equity analyst Brett Castelli, the credit extension is going to end up adding a lot of value to stocks leveraged to the solar power. First Solar stock has seen a 56.91% year-to-date jump as of Sept. 13,” noted Morningstar analyst Margaret Giles.

First Solar is one of the dominant makers of photovoltaic solar panels, modules, and utility-scale solar equipment, confirming its leverage to increasing adoption solar power. As for Plug Power, its green hydrogen exposure could be a long-term positive trait.

“Like many areas of renewable energy, the green hydrogen market is still young. Plug Power has yet to build out a long-term competitive advantage, but its strategy of tapping into different areas of the market, rather than just focusing on highly competitive areas like fuel-cell electric vehicles or electrolyzers, may help the company develop a moat in the future,” added Giles.

As for how this all matters to CNRG investors, First Solar is the ETF’s largest holding at a weight of 4.35% as of September 20, according to issuer data. Plug Power is the fund’s number three component at a weight of 3.28%.