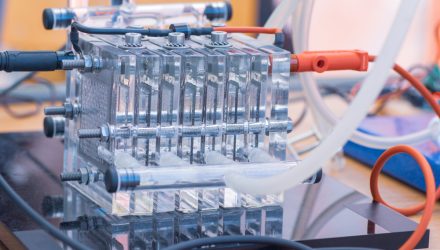 As we look for alternative energy sources to replace dirty fossil fuels, hydrogen-based power could have what it takes.

“Hydrogen-based power has the potential to solve a major issue for humankind — our dependence on fossil fuel. Stopping global warming and climate change requires us to transition to a low carbon economy. Hydrogen is abundant and when used as an energy source only emits water. This ‘green’ energy has been widely known for decades, but it has never been scalable for large-scale use,” State Street Global strategists led by Patrick Bernard said in a research note.

Hydrogen-based fuel cells have been in use for over half a century, but the adoption rate has been constrained by concerns like safety and higher cost. Hydrogen is highly flammable and creates concerns over safety in transport and storage, as well as in its consumption. Consequently, hydrogen also comes with high transportation and storage costs, and the fuel cells themselves are complex devices.

However, the heightened threat of climate change and the greater demand to reduce global carbon emissions have increased investment in fuel cell technology. We may see that these efforts are going to bring down costs to compete with other technologies over the next decade.

Hydrogen production has been expanding at around 3% annually for the last few decades. The Hydrogen Council projects that hydrogen could grow from 1% of the energy mix today to 18% by 2050, which would translate to a production growth rate to something closer to 7% from the current 3%.

The strategists also highlighted the potential ramp-up in “green hydrogen” production, or producing hydrogen through the electrolysis of water using renewable energy as a power source. Current hydrogen production methods come with a carbon dioxide by-product, which is then captured in a costly process.

“We are looking at a technology that developed decades ago but finally seems to be reaching an inflection point,” according to the strategists. “Its widespread adoption will create winners as well as disruption.”