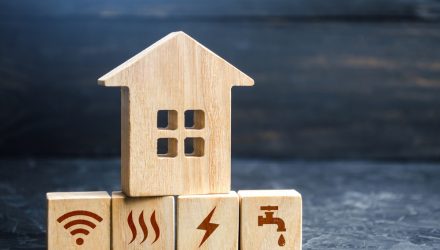 The utilities sector is usually vulnerable to rising interest rates and high inflation – the exact scenarios investors are contending with this year.

Yet, the sector is a shining star in 2022. The Utilities Select Sector SPDR Fund (XLU), the largest exchange traded fund dedicated to utilities stocks, entered Monday down 4.04% year-to-date, which is something to behold when the S&P 500 is down 19%.

A result of this year’s impressive showing for utilities stocks, including XLU components, is that the already richly valued sector is getting pricier, but there may be some sound reasoning behind that valuation increase. These include the sector’s defensive status and leverage to renewable energy.

“The stability of utility companies may not be the only factor in their ability to attract investors as of late. The federal government, thanks to the Inflation Reduction Act, also known as IRA, along with state and local governments, have increased their efforts when it comes clean to energy investment. That will create new opportunities for utility companies to expand over the next decade, Morningstar senior equity analyst Travis Miller says,” noted Morningstar analyst Jakir Hossain.

As has been widely noted, the Inflation Reduction Act is a boon for the renewable energy industry and utilities are increasingly part of that conversation because they’re the companies with the capabilities to transmit wind and solar power.

Looking at it another way, renewable energy is a growth industry and adds an element of growth to utilities – a group rarely associated with growth. In part, that also explains why the sector is pricey today.

“All of that has contributed to investor’s enthusiasm, which has driven up valuations and made utilities the most overvalued stock sector in the market, according to Morningstar analysts. As of Sept. 15, it trades at an 8% premium relative to Morningstar’s Fair Value Estimates,” added Hossain.

Regarding rising interest rates, XLU’s 2022 showing is something to behold because the sector is one of the most indebted, which usually isn’t a favorable trait in rising rates environments.

“On top of that, utility providers are one of the most leveraged businesses in the country, aside from banks, leaving them especially sensitive to rising interest rates. Higher rates mean higher borrowing costs, another way in which utility companies’ costs could increase,” concluded Hossian.

Still, it’s impossible to refute XLU’s 2022 performance and the ETF’s growing exposure to clean energy, which could be a long-term positive catalyst.