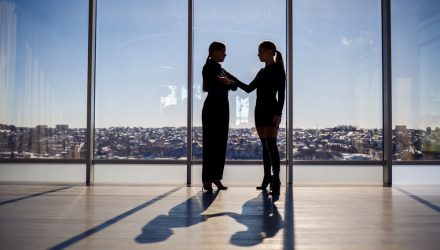 One of the benefits of the environmental, social, and governance (ESG) investing movement is that more investors, including professionals, are paying attention to companies’ gender diversification at the highest levels.

In fact, that point of emphasis is fueling the evolution of gender lens investing. Some exchange traded funds make it easy for investors to get involved, including the SSGA Gender Diversity Index ETF (SHE).

SHE, which tracks the SSGA Gender Diversity Index, focuses on companies that score well in terms of gender diversity in senior leadership roles relative to competitors in the same sector. The ETF doesn’t require that high-ranking women at such corporations occupy the role of chief executive officer. Indeed, there’s work to be done regarding elevating more women to the CEO spot in publicly traded companies.

“Women still hold a disproportionately small number of CEO roles among U.S. companies. How small? Only 8% of the companies on Morningstar’s inaugural list of the best companies to own are led by female CEO,” noted Morningstar’s Susan Dziubinski.

For long-term investors, SHE could be a compelling alternative or complement to core equity exposures because various studies suggest that companies that score well in terms of gender diversification outperform less diverse rivals. However, that shouldn’t be the sole determinant in getting involved with the ETF.

Again, the number of public companies currently led by female CEOs is small, but the group is home to some venerable names, including some that are among SHE’s 204 holdings. Those that Morningstar Economic Moat Ratings found on the firm’s list of best women-led firms to own that are also SHE components are defense giant Northrup Grumman (NYSE:NOC) and Yum China Holdings (NASDAQ:YUMC).