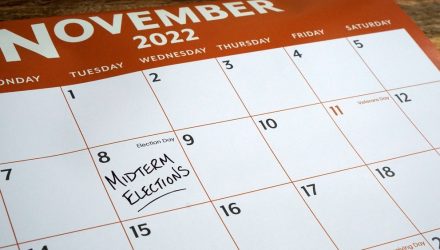 As we consider the current political landscape and the various midterm election scenarios, investors can turn to exchange traded funds to capture the potential outcome.

In the recent webcast, Axelrod and Rove on What’s at Stake in the Midterms, Karl Rove, foremost conservative commentator and strategist, and former Deputy Chief of Staff and Senior Advisor to President George W. Bush; David Axelrod, senior political commentator for CNN,  and former Senior Advisor to President Barack Obama; and Michael Arone, chief investment strategist for US SPDR Business, State Street Global Advisors, navigated the ins-and-outs of the midterm election and outlined potential outcomes that investors should be ready for.

Rove has indicated that Democrats may be fumbling the ball when it comes to the economy as many politicians remain adamant that the U.S. economic engine is chugging along despite the concerns of the average American family. Foremost, inflation remains the greatest cost to the average U.S. consumer, with many already seeing a sticker shock when it comes to the pumps or at their local grocery stores. While employment rates remain robust, Americans aren’t seeing their cost of living wages keep up with inflationary pressures, so paychecks are being stretched.

In face of the elevated inflationary pressures, the Federal Open Market Committee has executed its fourth consecutive 75 basis point interest rate hike, further adding pressure to the U.S. economy. Meanwhile, market participants anticipate the Fed to slow down its rate of hikes with a terminal rate by spring.

Axelrod has touched upon the messaging issue that Democrats face today to get voters to come out during the midterm elections, which have historically exhibited a lower turnout rate when compared to presidential elections. Meanwhile, political runners have to simplify complex issues to get through to a wider audience, especially independents and casual voters.

Looking ahead, after the midterm election dust settles, Arone pointed out that on a more positive note, the S&P 500 has historically posted strong returns following a midterm election, on average, significantly outperforming pre-midterm periods. Over 17 of the past 19 midterm elections since 1946, stocks have outperformed in the six months following an election, compared to the six months prior to the midterms. While a split Congress would likely mean legislative gridlock, the market has also historically performed better during periods when there is a split Congress.

Additionally, the incumbent president’s political party lost seats 13 times in the U.S. House of Representatives and nine times in the U.S. Senate in the past six decades across 15 midterm elections. A sitting President’s party historically lost 25 seats in the House, on average. The low President approval rating has also coincided with more lost seats.

To help prepare portfolios for any outcome, Arone outlined several considerations on how energy policy, defense spending, tax policy, and infrastructure programs could be impacted based on whether the Democrats or Republicans control Congress, highlighting various SPDR ETFs that align with each potential outcome.

For example, in the energy sector, the SPDR Kensho Clean Power ETF (CNRG) and the SPDR S&P 500 Fossil Fuel Reserves Free ETF (SPYX) could be plays for a Democrat-controlled Congress, which would be more friendly toward shifting to a climate-friendly policy outlook. On the other hand, the SPDR S&P Oil and Gas Exploration and Production ETF (XOP) and the SPDR Oil & Gas Equipment & Services ETF (XES) would be investment ideas for a favorable Republican outcome, which could restrict the implementation of Biden’s preferred climate agenda, curtailing additional climate investments.

When it comes to defense spending, both sides of the aisle are in favor of increased military expansion in the wake of the Russia-Ukraine war, along with the future of defense in the cyber space. To capture these potential plays, investors can turn to something like the SPDR S&P Aerospace & Defense ETF (NYSEArca: XAR) and SPDR S&P Kensho Future Security ETF (NYSEARCA: FITE).

If we see a Republican sweep, the country could likely see the extension of popular tax breaks and a reversal of some of the tax provisions in the Inflation Reduction Act, which would likely be beneficial for firms with significant revenue overseas and elevated buyback activity, along with technology-related sector ETF plays like the SPDR S&P Semiconductor ETF (NYSEArca: XSD) and the SPDR NYSE Technology ETF (XNTK).

On the other hand, if we maintain the Democrat status quo, the country could see corporate and individual tax increases. The 1% buyback tax may increase further, which may make dividends more attractive than buybacks for shareholders, potentially benefiting low-tax sectors as well as high dividend-paying firms. Investors can turn to income plays like the SPDR Dow Jones REIT ETF (RWR) and the SPDR Portfolio S&P 500 High Dividend (SPYD).

Financial advisors who are interested in learning more about investment ideas for the current market environment can watch the webcast here on demand.