You are at:Home»ESG Channel»ESG Could Be Way to Access Small-Cap Bargains 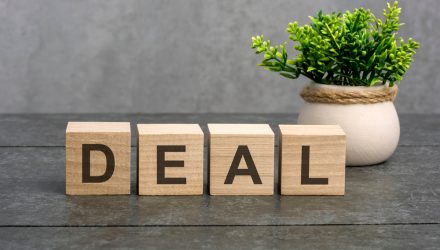 Small-cap stocks are following large-cap counterparts lower this year, but quiet as it’s been kept, the S&P SmallCap 600 Index is outperforming the large-cap S&P 500 by more than 200 basis points year-to-date.

For the week ending June 2, the S&P SmallCap 600 is up more than 5%. Time will tell if that run is part of something more substantial, but what is clear today is that some market observers are spotting bargains among smaller stocks.

Investors who want to get in on small-cap bargain hunting while applying environmental, social, and governance (ESG) principles may want to consider the SPDR S&P SmallCap 600 ESG ETF (ESIX). ESIX, which debuted in January, follows the S&P SmallCap 600® ESG Index — the ESG cousin of the aforementioned S&P SmallCap 600 Index.

“Stock-market leadership trades off over time between shares of large-cap and small-cap companies. While it is hard to predict when the next rotation will kick off, investors say some small-cap stocks have fallen so far that they now look inexpensive, compared with shares of larger companies,” reported Karen Langley for the Wall Street Journal.

ESIX holds 405 stocks, and while more reside in an S&P SmallCap 600-tracking exchange traded fund, it’s a positive sign that an ample amount of smaller stocks meet the ESG criteria necessary for entry into ESIX.

To the point about value in small-caps, ESIX answers that bell with an almost 19% allocation to financial services stocks — one of the primary value sectors regardless of market cap spectrum. ESIX could also prove to be a worthy consideration if the U.S. economy averts a recession.

“Small-cap stocks historically have struggled ahead of recessions but then outperformed in the early stages of expansions. While it is an open question when the U.S. economy will enter its next recession, that eventual leadership is one reason that money managers say it is important to stay invested in the group,” according to the Journal.

As for exposure to smaller stocks that may have fallen too far too rapidly, ESIX may offer that as well. Technology and consumer discretionary stocks are struggling year-to-date, and it’s likely that plenty of smaller names from those sectors are suffering as a result. Those two sectors combine for almost 26% of the ESIX roster.