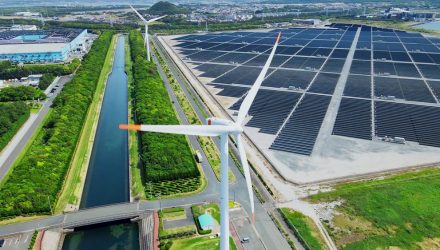 Leading up to the passage of the Inflation Reduction Act, renewable energy and clean technology stocks and exchange traded funds rallied. However, that scenario rapidly reversed as the broader complex of growth stocks again slumped, taking ETFs such as the SPDR Kensho Clean Power ETF (CNRG) along for the ride.

Better news could be ready to emerge as some market observers believe the sell-off in clean technology stocks, plenty of which reside in CNRG, is nearing its end.

“The stocks are down more than 30% since their peak levels in September, and a number are near or below their pre-Inflation Reduction Act levels, the firm said. The bill was signed into law in August and put $369 billion behind efforts to fight climate change and bolster U.S. energy security,” reports Michelle Fox for CNBC. “Clean tech stocks bounced after the IRA, but then reversed as part of broader risk-off sentiment, renewed interest rate sensitivity and a rotation from high-growth and unprofitable tech stocks, analyst Stephen Byrd wrote in a note Friday.”

Among the bank’s preferred clean tech equity ideas are Plug Power (PLUG) and Sunrun Inc. (RUN), both of which are CNRG member firms. Plug Power is the ETF’s tenth-largest holding at a weight of 2.85%. Morgan Stanley’s Byrd describes Sunrun as a “significant” Inflation Reduction Act beneficiary – a logical thesis because the legislation allocates billions of dollars to new solar projects.

“We expect continued strong demand for residential solar given a widening ‘economic’ wedge between the cost of solar and utility rates across the U.S., aided by an extension of the solar [investment tax credit]through the early 2030s and various ITC ‘boosters’ available to RUN,” he noted in the report.

The analyst adds that hydrogen fuel cell maker Plug Power is the biggest beneficiary of the recently signed into law Inflation Reduction Act.

Adding to the near-term appeal of CNRG is the point that there’s broader support among analysts for clean tech names in the wake of the Inflation Reduction Act becoming law. In fact, Goldman Sachs recently argued the full benefits of the law aren’t yet being recognized in the investment community, indicating some CNRG components have more upside potential than currently meets the eye.