You are at:Home»ESG Channel»Climate Change a Major Focus of Infrastructure Bill 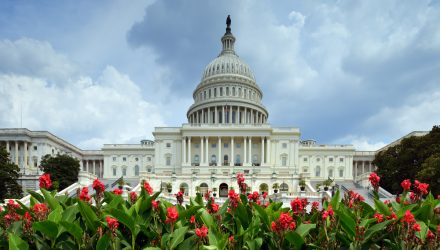 The $1 trillion infrastructure bill currently sitting in Congress that is scheduled to be voted on Thursday contains many provisions that would help the U.S. shift to face the threat of climate change and work to mitigate impacts that current practices are having.

The bill contains almost $550 million in new funds for projects in public works for the next five years in addition to current funding, reports the Weather Channel. The projects include boosting climate research and weather forecasting, an overhaul to the power grid, funding low emissions vehicles (including buses), and upgrading bridges and roads.

The White House fact sheet on the bill includes $60 billion to upgrading the power grid and infrastructure with new transmission lines that will not only work to make the grid more resilient, but will also make the addition of renewable energy easier while adding a “Grid Deployment Authority” to oversee the updates.

Severe weather events such as flooding, heat waves, hurricanes, wildfires, landslides, and winter storms have all taken a heavy toll on the existing power grid and road networks, including bridges. The bill contains funding to repair and rebuild existing bridges and roads in addition to upgrading the power grid. It is estimated that roughly 2 million jobs each year would be created for the next decade, and the bill is a fundamental part of President Biden’s platform.

The bill is currently set to be funded by $210 billion in unspent COVID-19 relief as well as $53 billion in unused unemployment insurance aid by states that stopped their programs, with the remainder coming from other sources.

Other projects included in the bill tackle updating the rail infrastructure, upgrading port infrastructures and airports (focusing around emission reduction), money to the U.S. Army Corp of Engineers for construction projects that focus on flood control and mitigation, a national network of electric vehicle charging stations, money for making low-income housing more energy efficient, and other projects.

The bill also includes assistance for tribal communities as well as communities of color, which are at higher risk of being impacted by the effects of global warming and increasingly worse weather events.

Investing in Sustainability With SPDR

Climate control and mitigating global warming are major focuses and concerns of regulatory agencies, governments, and investors. For investors that are looking for to gain exposure to companies through an ESG lens, State Street Global Investors offers several options.

One such option is the SPDR S&P 500 ESG ETF (EFIV), which takes a holistic approach to ESG by not only focusing on the environmental aspect of ESG, but on sustainability across the social and governance practices of the companies it invests in as well.

The fund tracks the S&P 500 ESG Index, which selects from top companies that meet ESG criteria within the S&P 500, while also adhering to the sector weights of the S&P 500 Index.

EFIV utilizes SPDJI ESG scores to rank companies based on their sustainability. This score is derived from analyzing a thousand data points covering a variety of topics collected from companies and then asking roughly 120 questions, according to the S&P Global website.

EFIV excludes companies involved in tobacco and controversial weapons, those that derive 5% or greater of their revenues from thermal coal extraction or generate power from coal, or that score low on the United Nations Global Compact standards.

The ETF’s top three sector allocations include 30.53% in information technology, 14.34% in consumer discretionary, and 12.54% in healthcare, as well as several other smaller allocations.

EFIV has an expense ratio of 0.10%, making it one of the cheapest ESG ETFs on the market.