You are at:Home»ESG Channel»Between a Desert and a Dry Place: Las Vegas and Its Water Conundrum 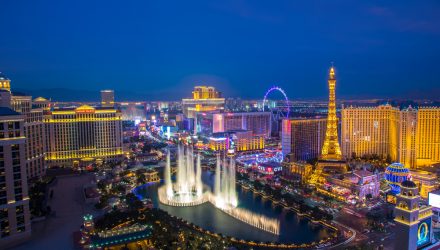 Between a Desert and a Dry Place: Las Vegas and Its Water Conundrum

“Water, Mr. Rango, water. Without it, there’s nothing but dust and decay. But with water, there’s life. Look at them. So desperate to live, they’ll follow it anywhere. That’s the immutable law of the desert. You control the water, and you control everything.”

It’s not often that an animated children’s film can provide startlingly relevant quotes and accurate context to real-world situations, but Rango does exactly that. It appears the 2011 movie was tailormade to help portray the real-life environmental situation facing the municipality of Las Vegas. A city of glitz, glamour, and gambling, Las Vegas is also a city built in a desert, and its main source of water is becoming increasingly less dependable. To understand the challenges facing Las Vegas, it helps to know where its water comes from, how it is stored, and who the users are before diving into water use policies, which ultimately may be what exposes the economy of Las Vegas as a mirage in the desert.

The Lifeblood of Las Vegas

Any talk about the water supply in the Southwest U.S. – be it Southern Nevada, Northwest Arizona, or Southern California – begins with the winter snowpack of the Western Rockies in Colorado and ends with the water levels of the upper and lower Colorado River Basins. Snow deposited by winter storms builds up in the Western Rockies during the winter. When spring arrives, this snowpack begins to melt and feed the various streams and rivers that make up the beginning of the Colorado River and the Colorado River Basin. This snowpack continues to melt throughout the summer, supplying the rivers and consumers downriver with much-needed freshwater throughout the year before the cycle begins again with the next round of snowstorms in the fall and winter.

The importance of this winter snowpack cannot be overstated. As it melts in the spring, it saturates downstream soils and fills reservoirs with the water they need to sustain these downstream populations. But climate change, in the form of reduced snowfall year over year, is causing a slow and steady depletion of the downstream water reserves. Combine this with a growing residential and commercial population demanding more water, and we have a water scarcity issue that can greatly impact the social and economic foundations that these downstream municipalities are built upon. Being cognizant of how impactful access to water can be for a municipality, and therefore that municipality’s debt, should be a credit consideration for any national municipal investor.

Snowpack in the Western Rockies
Source: List of dams in the Colorado River system 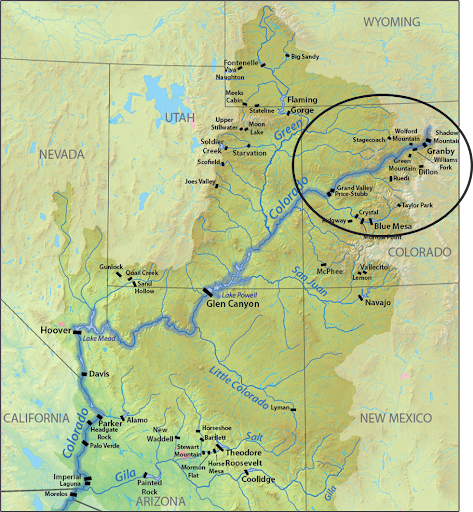 Both Lake Powell and Lake Mead act as reservoirs to trap and store excess water that is to be consumed at a later time within the region. Lake Powell acts as an initial storage basin for water that will eventually be used by residents and businesses that are tapped into Lake Mead. Lake Mead supplies water to approximately 25 million people in Nevada, Arizona, and California. Therefore, its continued sustenance is extremely vital to the health and wellbeing of the region’s ecology and economy. Since its inception in 1933, Lake Mead had averaged 1,173 feet of water, with a full pool being just shy of 1,225 feet. Since about 2000, the lake elevation has been trending down to its current average of 1,064 feet. 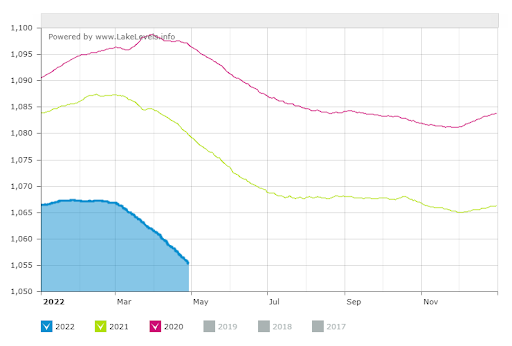 Under most scenarios, Lake Mead is forecast to continue its slow and steady decline in pool elevation over the next five years. 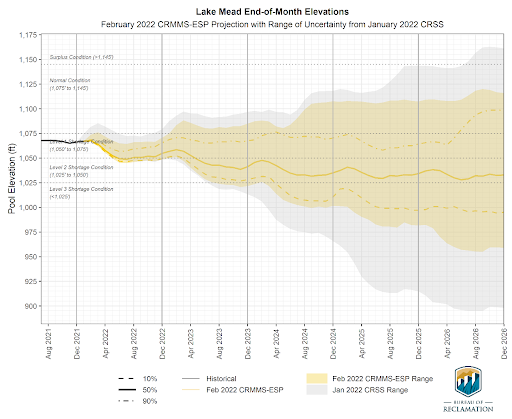 This continued downward trend will continue to put a strain on electricity generators and, more importantly, the water providers that depend on the lake. Southern Nevada Water Authority (SNWA) provides wholesale water treatment and delivery for the greater Las Vegas Valley and is responsible for acquiring and managing long-term water resources for Southern Nevada. Such providers are having to proactively construct additional pumping stations that allow them to access Lake Mead at lower lake levels, with their initial Pumping Station 1 being just above the current water level. In addition, they have activated the Low Level Pumping Station, which, as the deepest drilled station, is the last resort scenario for Las Vegas to avoid a “Day Zero” which would be the cessation of access to fresh water.  Considering the area obtains  approximately 90% of its drinking water from the Colorado River, this type of event would have a catastrophic effect on the local population and subsequently the economy. 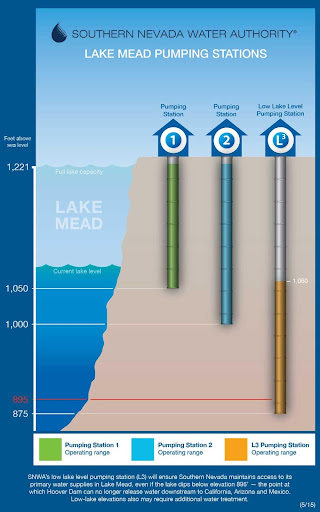 The last things to consider when it comes to the Colorado River Basin are the legally binding water agreements among the seven Colorado River basin states, the federal government, and Mexico. The agreements determine how much water each gets, when cuts are triggered, and the order in which the parties must sacrifice some of their supply. Under a 2019 drought contingency plan, Arizona, Nevada, California, and Mexico agreed to give up shares of their water to maintain water levels at Lake Mead, but it hasn’t been enough to stop the steady decline in water levels. So, if water levels in Lake Mead are continuing to drop, even after the agreed-upon cuts, which municipality is at the largest risk of the environmental, social, and economic impacts from this water shortage? The answer is Las Vegas.

Las Vegas is in Clark County in southern Nevada. Geographically, it sits in a basin within the Mojave Desert and is surrounded by desert vegetation and dry mountain ranges. The peaks in these mountain ranges reach elevations of over 10,000 feet and act as barriers to the strong flow of moisture from the surrounding area. 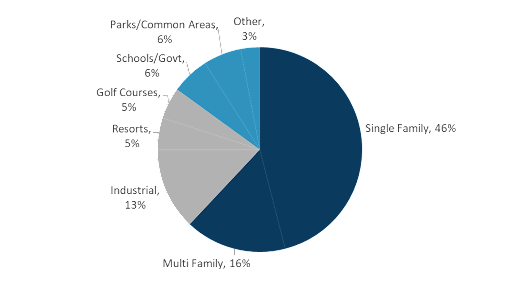 When it comes to water conservation resources, the residential user base would be the most impactful place to start. Facing a long-term drought, a forecasted population, and with a history of water use to maintain water-intensive programs (i.e., golf, lawns, lakes), the Southern Nevada Water Association (SNWA) has started to introduce programs and initiatives to conserve water within their residential user base. But are they doing enough, especially when compared to other water authorities that have faced droughts and have a relatively similar water resource profile?

In the table below, we compare Las Vegas to Austin, Texas, in terms of their city general obligation debt rating, their Climate Risk and Readiness category, and their residential water use policies and initiatives. 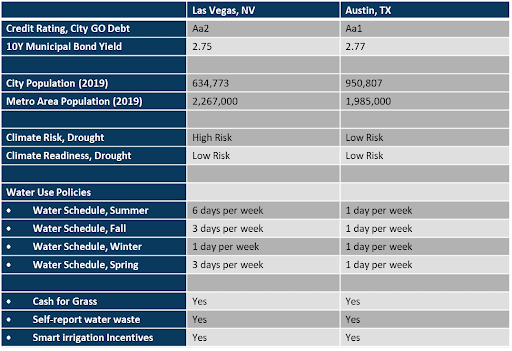 Municipal investors should have an eye toward climate-related stresses, and several things are worth highlighting in this comparison. The first, and most obvious, is the perceived drought risk levels being faced by these municipalities. The ND-GAIN Urban Adaptation Assessment is an interactive database with more than 270 U.S. municipalities that explores the connection between vulnerabilities to climate disasters, adaptive capacities, and how these are distributed within a city. From an economic standpoint, Las Vegas is considered to be at high risk of exposure to a drought because it lacks the adaptive capacity, in the form of a drought or water management plan and has a relatively high population density when compared to Austin.

Faced with an uncertain climate and declining water supplies caused by insufficient snowpack, increased demand due to population growth, and industries that are water intensive, the Las Vegas metropolitan area faces a daunting task of pinpointing exactly how much water they can use while maintaining the character of the population and industries that were built upon it. For municipal investors, it is important to make sure they are being adequately compensated for this forward-looking, long-term climate risk that Las Vegas is facing. As it stands now, it appears that neither the underlying credit rating, nor the current market yield reflect this risk when compared to Austin. Granted a ten-year time frame may not have a material impact on the economic outlook of either municipality, but it helps highlight some additional factors to be considered when investing in long-term debt. Only time will tell if Mother Nature grants Las Vegas a reprieve through increased snowfall, if conservation efforts pay off with a long-term sustainable water plan, or if the desert will eventually reclaim the area as the population moves to a more hospitable location.