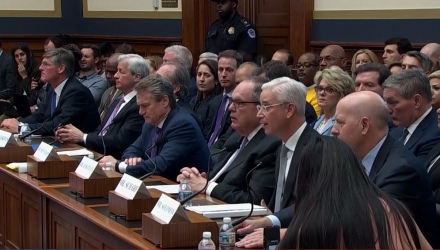 CEOs of big banks faced the music of Capitol Hill questioning on Wednesday, but the cacophony did little to affect the Financial Select Sector SPDR Fund (NYSEArca: XLF). XLF was down just 0.19 percent as of 12:30 p.m. ET.

Furthermore, XLF is up 8.48 percent year-to-date. All the government finger-wagging is a precursor to first-quarter earnings scheduled to kick off on Friday with the big banks reporting–some of which are currently being grilled by the House Financial Services committee.

In the Capitol Hill hot seat:

XLF is still trading just below its 200-day moving average, but did cross the line a couple of times thus far in 2019. As far as whether it presents a value play or a warning to “stay away” could depend on how well the banks do when they reveal their first-quarter earnings.

Meanwhile, the CEOs are facing a battery of questions regarding executive compensation, income inequality and the overall stability of the nation’s banking system. It all ties back to the financial crisis over a decade ago–a simple matter of “checking in.”

However, not all of Capitol Hill was ready to rain down fire and brimstone on the banks.

“Why are we here?” ranking member Patrick McHenry, R-N.C asked. “I fear our colleagues on the other side of the aisle are here to attack our economic system, attack the nature of our market. I fear my friends want to dictate social and environmental policy through government mandates on banks. That’s not the right approach.”