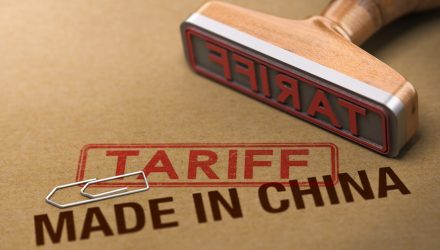 As U.S.-China trade negotiations broke down, the taste for China exchange-traded funds (ETFs) may have soured along the way, but that may soon change as the United States Trade Representative (USTR) office said on Tuesday that new tariffs on certain consumer items would be delayed until Dec. 15. In addition, other products were being removed from the new China tariff list altogether.

“The United States Trade Representative (USTR) today announced the next steps in the process of imposing an additional tariff of 10 percent on approximately $300 billion of Chinese imports,” the department said in a public statement. “On May 17, 2019, USTR published a list of products imported from China that would be potentially subject to an additional 10 percent tariff. This new tariff will go into effect on September 1 as announced by President Trump on August 1.”

“Certain products are being removed from the tariff list based on health, safety, national security and other factors and will not face additional tariffs of 10 percent,” the department added.

Following the announcement, Tuesday’s market session saw a boost in the technology sector as well as tech distributors like Best Buy.

As such, China ETFs could be an opportunity for bargain-hunting investors.

As such, one ETF to consider is the Xtrackers Harvest CSI 300 China A ETF (NYSEArca: ASHR) as a way for investors to gain exposure to China’s biggest, best and most authentic equities. ASHR seeks investment results that track the CSI 300 Index that is designed to reflect the price fluctuation and performance of the China A-Share market. In essence, it’s composed of the 300 largest and most liquid stocks in the China A-Share market, including small-cap, mid-cap, and large-cap stocks.