We’re just days away from one of the most anticipated elections in history. And I’m afraid millions of investors are going to waste time and money trying to “guess” who’ll win and how it will impact markets.

The truth is, smart investors won’t waste a second worrying about which party will win. In today’s essay, I’ll show you why, and share some of my top stocks to own right now.

I could fill the next five pages with data points about how stocks performed under different presidents. I’ve even read theories saying it’s best to buy stocks on October 1 of the second year of a presidential term and sell on December 31 of the fourth year.

I’ve done all the boring work for you. I’ve studied the data back as far as 1897, and one thing is crystal clear: There isn’t some golden, predictable pattern when it comes to presidents and the stock market.

The media does a terrific job at highlighting the Grand Canyon-sized differences between both sides. You’ll hear how Biden wants to fund the Green New Deal, and Trump doesn’t. Or that Trump wants to beef up the military, while Biden wants to slash defense spending.

This is all just noise. Ignore it, because it’s a distraction from what really moves the needle for stocks.

The only thing that matters

Let’s go back to 2008 for a second. It was the financial crisis. Stocks were in the middle of their worst year since the Great Depression. It was also an election year which saw the White House flip from Republican to Democrat as Obama swept to victory. Obama was viewed as the most socialist president since FDR, and many smart folks predicted his policies would crash markets.

And two months ahead of the election, close to half of respondents in a Bloomberg survey said an Obama win would be bad for financial markets. In fact, my friend who hated Obama’s policies sold every stock in his portfolio. And he didn’t touch stocks again for years. Big mistake.

Meanwhile, investors who ignored all this political theater got the last laugh. From the day Obama took office until election day 2016, the Nasdaq climbed 245%. The ‘08 crisis was such a financially traumatic event that stocks could have easily gone nowhere for years. How could the market rip higher when the world economy was on the brink?

You may remember the US government pumped $1 trillion of stimulus into the economy to keep the wheels turning. America’s central bank, the Federal Reserve, “created” another $1.4 trillion, which was funneled into US banks.

At the time, this was totally unprecedented. The US government had never thrown this amount of money at the economy before. Many smart people were convinced it would warp the financial system and turn the US dollar into toilet paper.

Instead, that trillion-dollar wall of money launched the longest stock bull market of all time. From early 2009 until March 2020, the Nasdaq handed investors 498% profits: 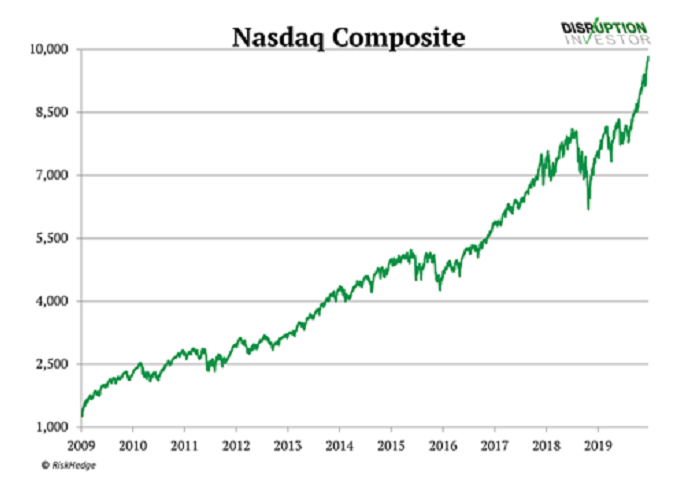 That’s the performance of the “average” stock. There are hundreds of disruptors that surged 1,000%+ in this period. In other words, despite a “socialist” taking the White House, the financial crisis, the housing bust, and a limp economy, stocks rocketed to all-time highs. And here’s the thing: 2008’s unprecedented easy money policies are small potatoes compared to what’s happening today.

Trump wants to borrow and spend trillions. Biden wants to borrow and spend trillions. Both political parties are bent on doing everything they can to spur the economy higher with endless spending and monetary rocket fuel. And no matter who wins this November, they’ll continue to spend and borrow money at an unprecedented rate. And that’s great news for the specific “disruptor stocks.”

Have you ever owned a “politically sensitive” stock? These are companies that soar or crater based on who sits in the White House. For example, do you remember when Obama signed laws restricting gun sales? Turns out he was the best gun salesman in America for six years running. Firearms company Sturm Ruger (RGR) surged 1,300% after Obama’s election: 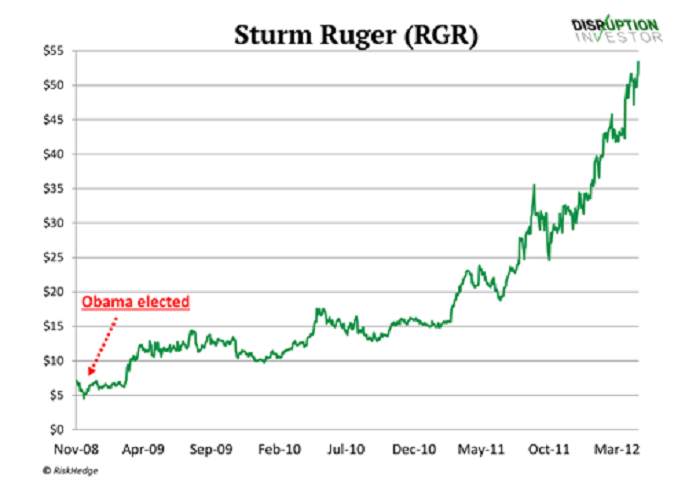 When Trump won in 2016, he promised to rebuild the US military. That lit a fire under the largest defense contractor, Boeing (BA): 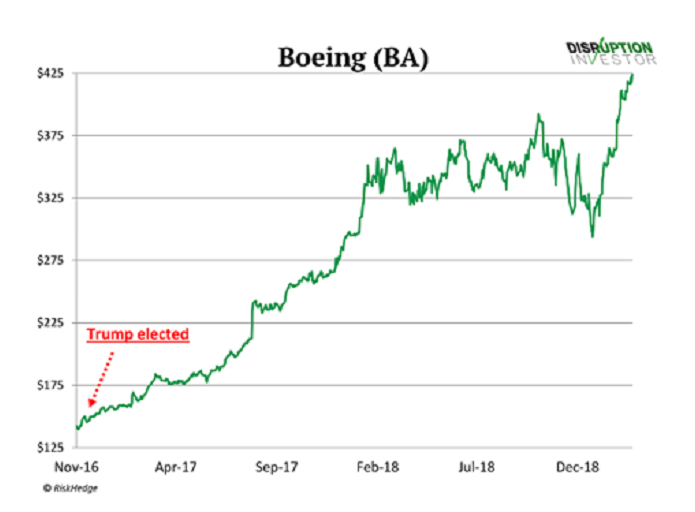 In short, some companies live and die on election results. Buying these types of stocks is like flipping a coin. Wouldn’t you rather own companies that perform well no matter who’s president?

The world’s best disruptors are totally impervious to elections and the economy. Take a look at how Amazon, Apple, and DNA mapper Illumina sped through the 2008 election and financial crisis: 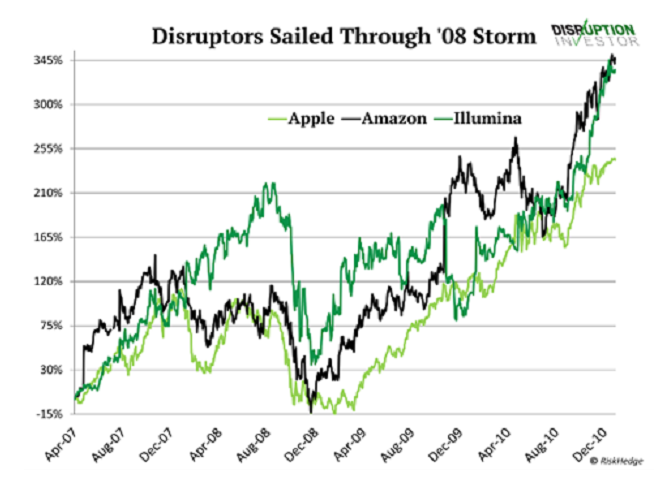 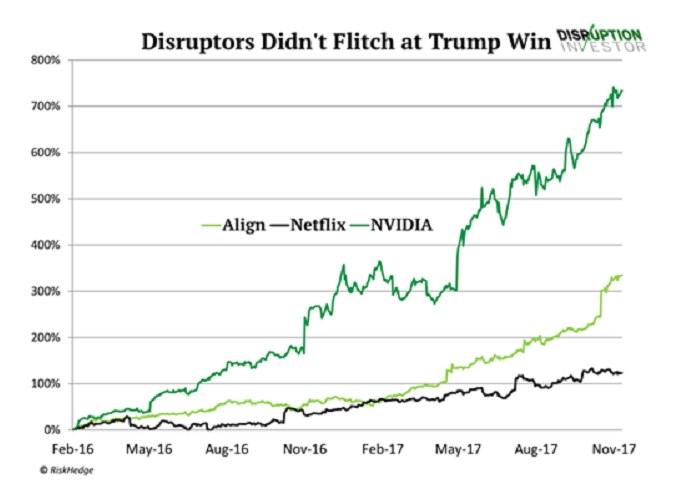 Here Are the Stocks I Recommend Today

The use of “dirty” cash is falling off a cliff right now. Instead, folks are whipping out their Mastercards and Visa cards at the checkout. PayPal and its Venmo “app” continue to eat the lunch of stodgy old banks.

In just the past three months, Americans sent $37 billion to one another, for free, through Venmo. In fact, 60 million+ folks use Venmo to send and receive money at least once a month. That’s 60 million people who aren’t paying for bank wires anymore. Do you think these disruptions will reverse depending on who wins on November 3? Not a chance.

Computer vision is also untouched by politics. Dozens of disruptors are using NVIDIA (NVDA)’s powerful chips to teach computers to “see.” World-class scientists and engineers are inventing groundbreaking disruptions like self-driving cars and superhuman doctors. Do you think they’ll stop solving these difficult problems because of the US election? Not a chance.

Whether the Republicans or Democrats are in power, these creators will still change the world. If you haven’t yet, considering adding PYPL, MC, V, and NVDA to your portfolio today. They should thrive no matter who’s in the White House for the next four years.