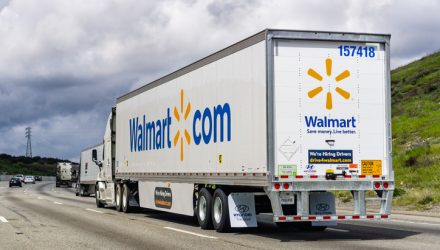 Walmart Is Quietly Turning Healthcare on Its Head

Was Obamacare good for the average American family? Before you answer, look at this chart… 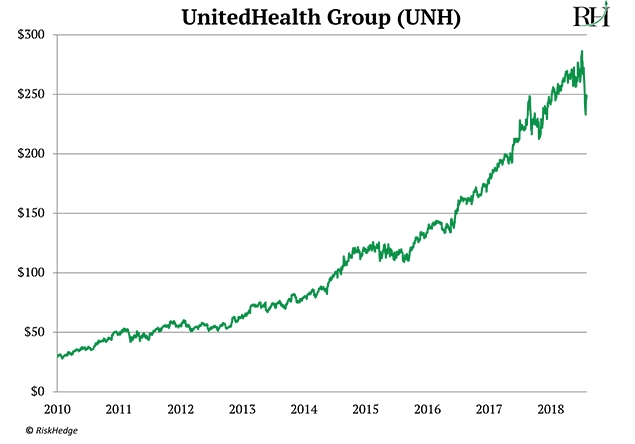 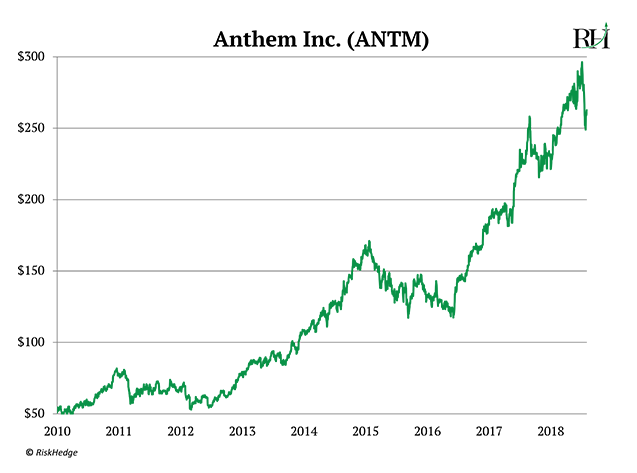 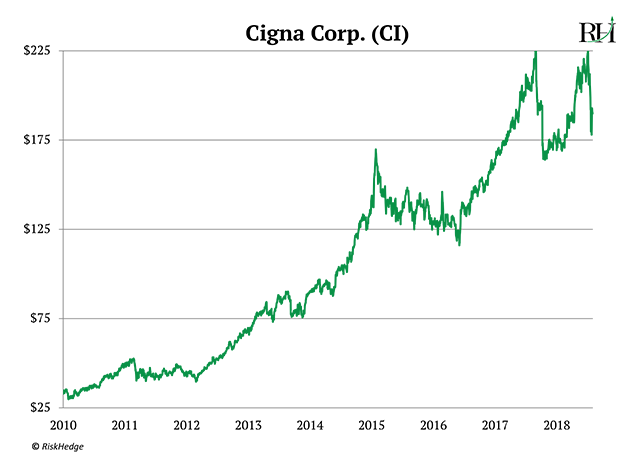 Talk about a boom!

In 2009—the year before Obamacare—UnitedHealth turned a $3.8 billion profit. This year it’s on track to rake in $13.5 billion.

You might expect to see a 3.5X surge in profits in a cutting-edge tech stock. But in a tired old industry like health insurance? Since 2009, UnitedHealth’s profits have ballooned roughly as much as Google’s!

So… Did Obamacare Help the Little Guy Like It Was Supposed To?

Keep in mind, health insurance premiums were already rising before Obamacare. From 1999 to 2009, they climbed 125%. Then from 2009 through today, premiums got another 150% more expensive.

Roughly one in every five dollars spent in the US today goes toward healthcare. In fact, Americans now spend more on healthcare than anything except housing.

Are you familiar with the crowdfunding website GoFundMe? It allows people to raise money for all kinds of things.

Sadly, every one in three dollars raised on GoFundMe goes toward medical bills today. In total, $650 million was raised to pay medical bills in 2018.

Despite paying through our teeth for insurance, only one in six folks are happy with their health coverage, according to a Gallup poll.

What Makes an Industry Ripe for Disruption?

My team and I set out to figure out what makes an industry “disruptable.” For the most part, it all comes down to the difference between the price you pay for something and what you get for it. Too big a gap means an industry is ripe for disruption.

Take cable TV. From 1998 to 2013, the price of cable TV more than doubled. Yet TV didn’t change all that much. You still watched the news on NBC or Fox…

Still, cable companies like Comcast (CMCSA) kept hiking prices year after year. When prices surge without much improvement in quality, it attracts disruptors like a moth to a flame. Of course, Netflix (NFLX) came along and wiped the floor with cable companies.

Over 35 million Americans have dumped cable TV in the past five years. Meanwhile, Netflix now has more subscribers than the largest five cable companies combined!

In this regard, healthcare is practically BEGGING to be disrupted.

As I said, healthcare premiums have shot up 275% since 2000. While there have been major breakthroughs like gene testing and 3D-printed body parts led by disruptive companies like Illumina (ILMN), they have little to do with the cost of delivering healthcare.

Believe it or not, America’s largest retailer, Walmart (WMT), is my top choice to disrupt healthcare.

“Walmart Health” opened its first location next to Walmart’s retail store in Dallas, Georgia this past week.

Walmart Health is essentially a mini-hospital. You can now walk in and get basic medical services like a doctor’s checkup, your teeth cleaned, an X-ray, a hearing test, and vaccines.

And here’s the kicker: Walmart is charging between 30–50% less for these services than hospitals do.

Besides disrupting the grocery industry, Walmart aims to “unbundle” the healthcare industry.

All types of medical services are lumped into health insurance today. We pay giant premiums that cover everything from a major surgery like a hip replacement, right down to something that should be routine, simple, and cheap—like a flu shot.

With everything “bundled” under one insurance policy, nobody really knows what anything costs. Say you get a blood test at the hospital. Do you know if it’s going to cost you $300… $1,000… or $3,000?

Soon most folks will get their basic services at a local health clinic—like a Walmart Health. These local clinics won’t have ties to large hospital networks and insurance companies. And they will cost a fraction of what routine healthcare costs today.

Walmart is a Jedi-master at slashing unnecessary costs. For example, in 2006 it launched a line of generic prescription drugs, each costing $4. Today, it runs one of the biggest pharmacies in the US with $35 billion in sales last year.

Disrupting Healthcare Is a Mammoth Task

Insurance companies, many hospitals, and the government all have a vested interest in keeping the current system alive.

As I mentioned, health insurers are making record profits. So too are hospitals like HCA Holdings (HCA), which runs America’s largest chain of hospitals. HCA’s profits jumped 70% last year to a record $3.8 billion.

The current healthcare system has powerful friends. Expect the disruption of healthcare to meet serious resistance. But I suspect the “great healthcare” boom is winding down. 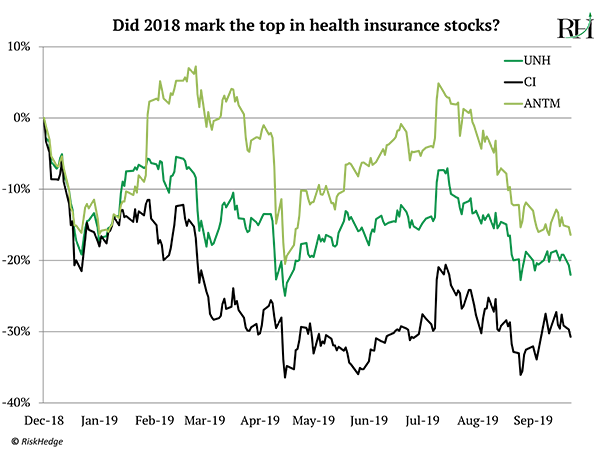