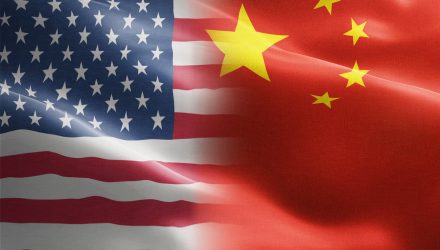 U.S. markets and stock exchange traded funds weakened Thursday ahead of a widely anticipated U.S.-China trade meeting to potentially decide the fate of a prolonged dispute that threatens global markets.

The equities market retreated on concerns that President Donald Trump would escalate the trade war by hiking tariffs on $200 billion in Chinese imports to 25% Friday unless Beijing “stops cheating our workers,” Reuters reports.

However, markets did pare some of the earlier losses Thursday after Trump revealed he received a “beautiful letter” from Chinese President Xi Jinping as a two-day meeting begins in Washington later in the day.

“All this macro uncertainty out there is making investors risk-averse, particularly in an environment that isn’t great,” Michael Geraghty, equity strategist at Cornerstone Capital Group, told Reuters.

The benchmark S&P 500 slipped below its short-term trend lines at the 50-day simple moving average Thursday.

“The trade tensions are taking down markets with a broad brush. In all likelihood there is going to be a resolution sometime or it could lead to a showdown,” said Stephen Massocca, managing director at Wedbush Securities, told Reuters.

The uncertainty over the whole talks has caused markets to oscillate back and forth without a sense of direction as many whom originally thought the deal was being finalized to suddenly realize negotiations may soon collapse.

“Investors had not been pricing in the additional tariffs on Chinese imports,” Katie Nixon, chief investment officer of Northern Trust Wealth Management, told the Wall Street Journal. “There are core issues that need to be dealt with for a successful deal, and I’m not sure it’s going to happen in the next 24 hours.”