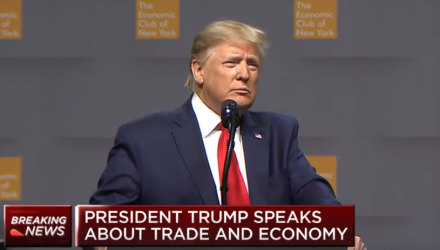 Per a Fed statement:

“At the President’s invitation, Chair Powell met with the President and the Treasury Secretary Monday morning at the White House to discuss the economy, growth, employment and inflation.

Chair Powell’s comments were consistent with his remarks at his congressional hearings last week. He did not discuss his expectations for monetary policy, except to stress that the path of policy will depend entirely on incoming information that bears on the outlook for the economy.

Finally, Chair Powell said that he and his colleagues on the Federal Open Market Committee will set monetary policy, as required by law, to support maximum employment and stable prices and will make those decisions based solely on careful, objective and non-political analysis.”

Following the discussion, Trump tweeted that the meeting was “very good” and “cordial.”

Just finished a very good & cordial meeting at the White House with Jay Powell of the Federal Reserve. Everything was discussed including interest rates, negative interest, low inflation, easing, Dollar strength & its effect on manufacturing, trade with China, E.U. & others, etc.

President Trump has repeatedly lambasted the central bank for their decisions on interest rate policy. In a speech to the Economic Club of New York last week, Trump didn’t mince words when it came to his feelings on the Federal Reserve—he said that the major indexes could be performing better it weren’t for the Fed’s initial reluctance to cut interest rates.

After four straight interest rate hikes in 2018, the central bank reversed course this year, instituting its third straight rate cut recently. Per a CNBC report, President Trump “noted that since his election, the S&P 500 is up more than 45%, the Dow Jones Industrial Average is up over 50% and the Nasdaq Composite is up 60%. But those numbers could be way higher, Trump said, if it weren’t for the reluctance of the Fed.”

“And if we had a Federal Reserve that worked with us, you could have added another 25% to each of those numbers, I guarantee you that,” Trump said.

“But we all make mistakes, don’t we?” the president added. “Not too often. We do make them on occasion.”

In central bank fashion, Powell has steered clear from opining on political blowback from the president, preferring to stay focused on the economy.