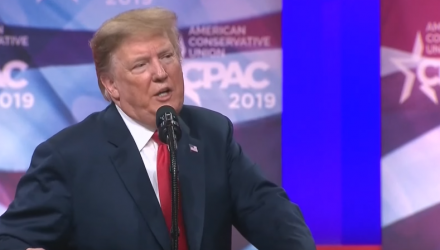 Trump Takes Swipe At Fed Ahead of Possible Rate Cut

U.S. President Donald Trump took a swipe at the Federal Reserve ahead of its interest rate policy decision, using Europe and China as examples of economic powers that are lowering rates while the U.S. central bank stands pat.

The E.U. and China will further lower interest rates and pump money into their systems, making it much easier for their manufacturers to sell product. In the meantime, and with very low inflation, our Fed does nothing – and probably will do very little by comparison. Too bad!

Earlier this year, Trump said the economy would take off “like a rocket ship” if the Federal Reserve cuts interest rates. Furthermore, he added that the central bank is impeding economic growth in the U.S. and has “really slowed us down.”

Meanwhile, the U.S. economy added 170,000 nonfarm payrolls and the unemployment rate currently stands at a low 3.7 percent, but capital markets are still expecting the U.S. Federal Reserve to cut interest rates this week. Will a 1/4-point cut continue to provide strength for U.S. equities?

U.S. Gross domestic product (GDP) fell during the second quarter to 2.1 percent, but still bested Wall Street analysts who were expecting a larger decline. GDP fell from 3.1 percent in the first quarter, which represents the weakest increase since the first quarter of 2017.

The majority of the capital market is looking for an interest rate cut by the Federal Reserve to propel the major U.S. indexes, but a sluggish showing in second-quarter earnings could mean that U.S. equities could be overvalued.

“The market is pricing in a 25 basis point cut,” said Quincy Krosby, chief market strategist with Prudential Financial. “We already know of two Fed presidents who don’t think we need it, so there’s obviously going to be a discussion, with the strong data. The chairman, who is in the camp that we need to have an insurance cut, is going to make the case that while the economic data are all gaining strength, they are still worried about weakening conditions, due to uncertainty regarding trade and tariffs.”