You are at:Home»Equity ETF Channel»Trump on China Trade Negotiations: No Deal, More Tariffs 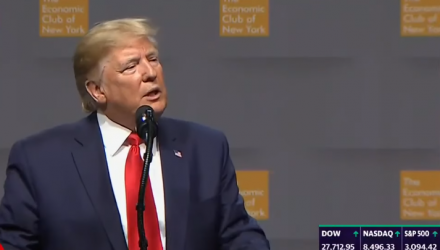 The U.S.-China trade deal saga could continue reaching new heights after U.S. President Donald Trump said on Tuesday in a meeting with his Cabinet that if a trade deal is not reached, more tariffs would be on the horizon.

“If we don’t make a deal with China, I’ll just raise the tariffs even higher,” Trump said in the meeting.

The capital markets, in particular, have been sensitive to trade news and that was the case in Tuesday’s trading session as the Dow Jones Industrial Average fell over 100 points at the close. A spokesperson for China’s Commerce Ministry said earlier this month during a “phase one” trade deal condition that both countries agreed to remove certain tariffs before Trump struck down that notion, saying he never agreed to those terms.

“They’d like to have a rollback. I haven’t agreed to anything,” Trump said.

Thus far, the U.S. has imposed about $500 billion in tariffs on Chinese goods while retaliatory China tariffs were imposed on about $110 billion in American products.

As trade negotiations continue, other politicians are wary that a “phase one” deal or any type of deal will resolve any issues between the two largest economies.

“Communist China wants to control the entire world, including Americans,” said Florida Senator Rick Scott on CNBC’s “Squawk Box.” “They’re not our partner. They’re never going to be our partner under these existing leadership teams.”

As the 2020 election year comes closer, the economy will once again come to the forefront of issues. President Trump, Treasury Secretary Steven Mnuchin and Federal Reserve Chairman Jerome Powell met on Monday to discuss the economy, including the direction of monetary policy, inflation, employment and other wide-ranging economic issues.

Per a Fed statement:

“At the President’s invitation, Chair Powell met with the President and the Treasury Secretary Monday morning at the White House to discuss the economy, growth, employment and inflation.

Chair Powell’s comments were consistent with his remarks at his congressional hearings last week. He did not discuss his expectations for monetary policy, except to stress that the path of policy will depend entirely on incoming information that bears on the outlook for the economy.

Finally, Chair Powell said that he and his colleagues on the Federal Open Market Committee will set monetary policy, as required by law, to support maximum employment and stable prices and will make those decisions based solely on careful, objective and non-political analysis.”