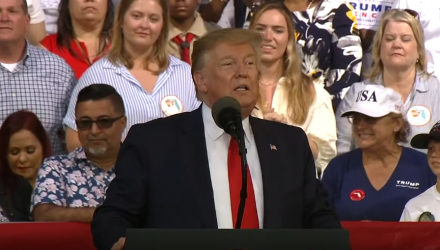 Trump on Increasing China Tariffs: “They Broke the Deal”

Regarding the latest breakdown in trade deal negotiations with China, U.S. President Donald Trump said the latest tariff threats were a necessity given that China “broke the deal.” President Trump’s latest comments came while speaking at a rally in Florida.

Trump also said hat the United States “won’t back down until China stops cheating our workers and stealing our jobs.”

“That’s what’s going to happen. Otherwise, we don’t have to do business with them,” he added. “We can make the product right here if we have to — like we used to.”

The reason for the China pullback & attempted renegotiation of the Trade Deal is the sincere HOPE that they will be able to “negotiate” with Joe Biden or one of the very weak Democrats, and thereby continue to ripoff the United States (($500 Billion a year)) for years to come….

China responded to the latest tariff threats by U.S. President Donald Trump by promising to take “necessary countermeasures” if the Trump administration follows through on its threat to increase tariffs on Chinese goods this Friday.

China’s Commerce Ministry said on Wednesday that it will make retaliatory moves if U.S. tariffs on $200 billion of Chinese goods are increased to 25% from 10% as promised by the Trump administration.

In the meantime, investors can take advantage of the latest dip in Chinese equities as a buying opportunity for China-focused exchange-traded funds (ETFs).

One ETF to consider is the Xtrackers Harvest CSI 300 China A ETF (NYSEArca: ASHR) as a way for investors to gain exposure to China’s biggest, best and most authentic equities via the country’s A-shares. ASHR seeks investment results that track the CSI 300 Index that is designed to reflect the price fluctuation and performance of the China A-Share market.