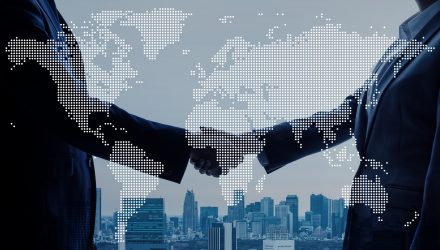 Trade deal optimism is fanning the flames for emerging markets (EM) and it’s leading to a deluge of inflows into EM ETFs. The markets are riding a tailwind of positive news from White House Economic Adviser Larry Kudlow saying that the U.S. and China are close to striking a trade deal.

Per a Bloomberg report, inflows into EM ETFs “that invest across developing nations–as well as those that target specific countries–totaled $1.06 billion in the week ended Nov. 8, adding to gains of $1.05 billion in the previous week, according to data compiled by Bloomberg. This was the fifth straight week of inflows and the biggest weekly one since Feb. 22. So far this year, inflows have totaled $3.61 billion.

An EM E-Commerce ETF to Consider

One EM ETF to consider is the Emerging Market Internet & Ecommerce ETF (NYSEArca: EMQQ), an ETF that focuses on the universe of internet and eCommerce innovators in some of the fastest-growing markets in the world, marked its five-year anniversary on November 13th, 2019, and is celebrating this morning by ringing the Opening Bell at the New York Stock Exchange.

EMQQ’s underlying index, the Emerging Markets Internet & Ecommerce Index, is overseen by a committee that includes such industry luminaries as Dr. Burton Malkiel and Dr. Linda H. Zhang. The EMQQ Index has a total number of holdings of 67 companies, China remained the largest weighted country in the index at 60.28%, while the weighting of Brazil was 4.60 % as of the latest rebalance in June 2019.

“The past five years have been an amazing time to watch how Internet and E-Commerce companies have developed within Emerging Market economies,” said Kevin Carter, founder of EMQQ. “This remains much more than a quarter-to-quarter or even year-to-year story though, as low smartphone penetration rates in the Emerging Markets coupled with what we believe are strong fundamentals and attractive valuations offer further potential for Emerging Markets internet and eCommerce companies to see growth for potentially decades to come.”

EMQQ tracks an index of leading Internet and eCommerce companies serving Emerging Markets. It seeks to offer investors exposure to the growth of online consumption in the developing world. EMQQ holdings operate in diverse markets such as India, China, Brazil, Turkey, Nigeria, and Indonesia, to name a few. To be included, the companies must derive their profits from Ecommerce or Internet activities and include search engines, online retail, social networking, online video, e-payments, online gaming, and online travel.

EMQQ is the first ETF to focus on the universe of internet and eCommerce innovators in some of the fastest-growing markets in the world. Per Yahoo Finance performance numbers, EMQQ is up 25%.